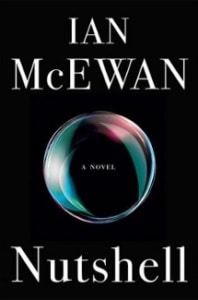 So, it’s been awhile since you read Hamlet?

Not to worry. Crack open Ian McEwan’s Nutshell and the plot will come back to you: Claudius kills his brother, King Hamlet, and seizes the throne as well as his widowed sister-in-law, Gertrude. Meanwhile, Prince Hamlet, son of Gertrude and the king, is out for revenge.

Based on a Danish legend known as Amleth, Hamlet is a tale as old as time, but McEwan’s modern interpretation is fresh and unusual. This is largely because the narrator—our Prince Hamlet, if you will—is an unborn baby.

In anyone else’s hands, fetus-as-narrator might come off as gimmicky, but the esteemed McEwan pulls it off. We learn how the baby boy feels in utero, and it’s riveting: “My limbs are folded hard against my chest, my head is wedged into my only exit. I wear my mother like a tight-fitting cap.”

This tight-fitting cap is named Trudy, and she is young and brazen. She sunbathes in a bikini top on the balcony and allows the house to molder around her. The baby despises her ghastly diet, bemoaning, “Slippery smoked herring, waxy new potatoes, the first pressing of the finest olives, onion, chopped parsley—I pine for such an entrée. How elegantly a Pouilly-Fumé would set it off.” (I don’t think of Ian McEwan as being witty per se, but some of his lines are so clever and unexpected that they make me snicker.)

The baby avoids dwelling on his growing hunger by paying attention to the BBC broadcasts that Trudy turns on in the middle of the night when she suffers from insomnia. As a result, he is ridiculously worldly and gives more than one long-winded soliloquy about the state of current affairs. “Typical third-term self-indulgence,” he concedes. (More snickering.)

The baby also listens to the trouble blooming between his parents. Trudy has separated from John and is sleeping with his boorish brother, Claude. You know where this is going, right?

McEwan twists the plot of Nutshell as the baby himself twists his own umbilical cord, creating a thick and eerie sense of suspense that takes the reader entirely off-guard. The crumbling London mansion where the story unfolds becomes just as forbidding as Shakespeare’s royal castle in Elsinore.

At the unsettling end of Nutshell we might not exhume the skull of poor Yorick, but we are left feeling similarly bereft. “However close you get to others, you can never get inside them, even when you’re inside them,” the baby tells us. Sadly, he is wise beyond his years.