Mother of All Questions, The 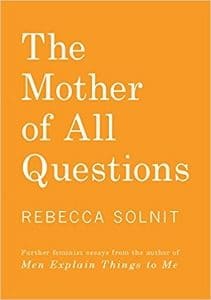 Does the sight of Bill Cosby make your stomach turn?  Accused by 51 women of multiple sexual assaults spanning over five decades, he once was the icon for all things wholesome and righteous.  Now he’s just disgusting.  In The Mother of All Questions, writer Rebecca Solnit touches on Cosby and his ilk, exposing the continued acceptance of atrocious behavior that’s been a part of human culture for millennia.

Solnit has been writing about violence toward women – and many other topics – for over twenty prolific years and there may be no one who does it better.  Fresh off her acclaimed 2014 collection, Men Explain Things to Me, she’s gathered together essays from 2014 through 2016 for this compilation.  Exploring a variety of topics – from society’s pressure on women to bear children to 1950s Hollywood – she presents an eloquent and thoughtful take on much of modern culture.

Both here and in her previous collection, the topics of rape and violence circulate throughout much of what she writes, frequently eliciting defensive responses from male readers both in person and on line.  Solnit doesn’t express much sympathy for men and their hurt feelings, frequently pointing out the dichotomy that’s consistently perpetrated.  Women are accused of silly exaggeration – most men aren’t rapists.  Yet at the same time, they are frequently warned to not get too inebriated lest a rape should happen to befall them.  Despite society’s frequent desire to make it appear otherwise, rapes don’t just happen; men inflict rape upon women in numbers that appall, especially since they are so frequently unreported, unprosecuted and unpunished.

Is it really too much to ask for women to be allowed to select the who, what, where, when and how of sex without being subject to manipulation, coercion, intoxication or mutilation at the hands of men?  Why is this controversial?  If the day ever arrives when rape is no longer normalized, rationalized and tolerated, it will be in part due to writers like Solnit.

What I find so riveting in Solnit’s writing is her unrelenting attention to language.  The words people choose to use are often a window into their soul, revealing much about their attitudes and opinions even if they don’t realize it. The author consistently takes others at their word and unfailingly uses her own words to deftly dissect an argument to its bare bones, both delicately and mercilessly.  This approach makes for some really revelatory reading.  In my experience, there’s no one writing who’s as good at it as she is.

Brought to you by Haymarket Books, a non-profit publisher from the left end of the political spectrum, The Mother of All Questions is another fine collection by one of the best observers of modern society.  Pulling no punches, Rebecca Solnit is a uniquely perceptive and articulate voice of reason in today’s increasingly crude and hostile world.  Highly recommended.