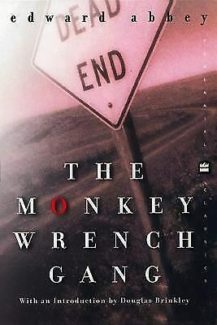 It’s the novel that generated a new verb that still resonates across the American West, even decades after it was first published in 1975.  The Monkey Wrench Gang is the late Edward Abbey’s most influential work of fiction and fully captures the man at his most crotchety.  Loaded with plenty of his patented cynicism (in regards to humans) and endless passion (in regards to the desert southwest – sans humans), it’s a uniquely caustic chronicle that has served as a rallying cry for the environmental movement ever since.

Distressed by the accelerating destruction of the American Southwest, all in the name of capitalism and greed, a foursome of independent-minded patriots decide to see what they can do to put a stop to it.  With ingenuity, bravery and plenty of gumption, they go about “monkey-wrenching” various construction sites in southern Utah and northern Arizona, hampering the efforts of absentee corporations to tame and monetize the wilderness.  Full of suspenseful twists and turns, incredibly conceived characters, as well as frequent misanthropic diatribes, one could make an argument that it’s a more readable, concise and entertaining version of Atlas Shrugged for the environmental movement (no 72 page lectures here). 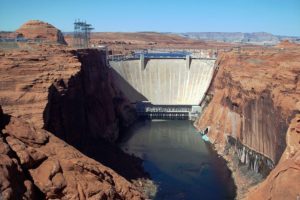 More than forty years after he wrote the book, it’s clear that Abbey was quite prophetic.  He certainly wasn’t exaggerating humankind’s despoiling effects on the environment.   He’s been dead 30 years, but I don’t think he would be any less appalled now than he was then. 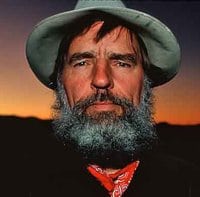 The author in his later years.

Abbey writes with a naturalistic flare that only comes with a deep understanding and appreciation for the canyon lands that make up the omnipresent background of the story.  His detailed descriptions of the rocks, rivers, fauna and flora lend a layer of authenticity to the story that takes the reader there, down into the dry red dirt.

I’m not an expert on the life of Edward Abbey, but it’s clear that the controversial damming of the Colorado River which resulted in the destruction of Glen Canyon in 1963 was one of the most emotionally affecting events in the man’s life.  Anyone who has read his essay entitled Down the River – published in Desert Solitaire in 1968 – would likely agree.  I’m sure I’m not the first one to suggest that that experience provided much of the emotive force that drives this particular storyline.

The MWG has weathered controversy over the years as it appears to promote eco-terrorism – a word that is frequently misused when civil disobedience might be more accurate.   But rather than a how-to guide for eco-terrorism, I see this book more as a brilliantly concocted revenge fantasy against anyone who has played an active role in the desecration of the environment.   He speaks for the canyons.   And he does it quite effectively.

Anyone who intends to read this book might appreciate knowing that it’s firmly planted in the 1970s, displaying much of the sexism, racism and raunchiness that were considered acceptable or cool at the time.  Moreover, it’s pretty clear that Abbey doesn’t give a rat if he offends anyone in the process of writing this book.  Readers can decide for themselves if these facts detract from the overall story.  For what it’s worth, this fifty-something year-old white guy was able to adjust to the occasionally cringe-worthy prose after the first hundred pages and still enjoy the adventure.   Other readers’ experiences may differ.

I never met the man, but I’ve always been curious if Ed Abbey was really as much of a misanthrope as his books make him appear to be.  Having finally read The Monkey Wrench Gang, I’m only more curious.  His characters seem to enjoy life and relish the time they spend with each other, whether they’re peacefully floating down the Colorado River or pouring a few gallons of Karo syrup into the fuel tank of a giant bulldozer.  But maybe he really thought that humankind was a completely lost cause.  It’s hard not to agree with him some times.  But even though I think that I’m inherently more optimistic than he ever was, I thoroughly enjoyed this book, misanthropy and all.  Definitely a must read for anyone who’s ever been intrigued by the crotchety old** man from Home, Pennsylvania.

**I know he never actually grew old – having died at age 62 – but he always seems like he’s about 85 years old to me.