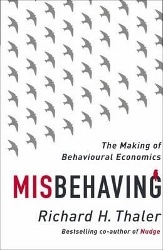 They had a terminal case of formula envy. From the earliest days of neoclassical economics in the first part of the 20th century, economists were obsessed with turning their field into a “hard” science like physics or astronomy.  Guided by a few straightforward premises and armed with a handful of fancy equations, economists convinced themselves that economic activities were thoroughly rational and predictable.  This belief gained widespread acceptance in various ivory towers and significantly influenced world leaders and governmental bureaucrats across the globe.  Unfortunately, in their obsessive efforts to create a rock solid science these theorists became collectively delusional in their view of human behavior.  It wasn’t until the past few decades that the cracks in the foundation of conventional microeconomic theory have been explored with any vigor.  Economist and author Richard H. Thaler was one of the first researchers to look behind the curtain and reveal that humans don’t behave as rationally as traditional economists think they do.  With plenty of self-deprecating humor he tells his story of academic bravery and intellectual creativity in Misbehaving. 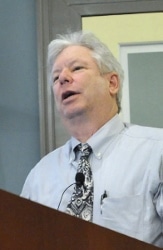 The author, a few years before his big screen debut in The Big Short.

Focusing on the myriad ways that theoretical “economic” humans differ from “real” humans, Thaler tells about the origins of what would eventually be called behavioral economics. Ridiculed by dogmatists from the beginning, he and his colleagues struggled to make economic theories more accurate by incorporating advances in psychology, an idea that was anathema to mainstream economists.  Supported by psychologist and future Nobelist Daniel Kahneman in the 1970s, Thaler attempted to understand the many ways that humans behave irrationally when they make economic decisions.

In 2012, JC Penny simplified their pricing system by lowering prices and doing away with coupons and sales. Why did this fail so miserably?

Why do credit card companies insist that those paying with cash be offered a discount rather than card users be assessed a surcharge?

Why is cash such a lousy gift? Why are gift cards popular?

Why do people have trouble saving for retirement?

Referring to dozens of interesting studies – his own and many others – Thaler reveals plenty of economic idiosyncrasies that seem to pervade human behavior. He also explores the wide ranging significance of these illogical peculiarities from stock market and housing bubbles to the NFL draft and game shows.  His clever research strategies and thoughtful interpretations make for a consistently entertaining read.

When he’s not deciphering people’s fiscal decisions, he’s revealing what it’s like to be an academic outsider. When you spend most of your time mischievously poking holes in the academic fantasy world that people have built their careers on, you tend to face some heated resistance.  Thaler’s good natured descriptions of these battles are a highlight of the book.

A charming and engaging exploration of human psychology – both in the marketplace and in the world of academia – Misbehaving provides an insider’s view of a fascinating scientific revolution.  Full of funny anecdotes, clever experiments, curious dilemmas and odd incongruities, I can recommend it highly for anyone who likes to think about money, human psychology and the way the two interact with each other.

Two other reviews of books about human psychology:  Thinking, Fast and Slow   /  The Marshmallow Test