Meet Me At the Museum

“I will recognize you. I will know you by the picture you have given me through all these months, a portrait in words.” 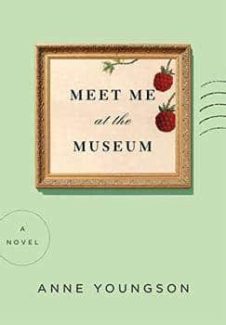 To open this small, unassuming book is akin to entering a museum. There’s a hushed reverence, a sense of timelessness, and an attention to detail that is both careful and luxurious.

Anne Youngson’s debut novel, which she wrote in retirement, at age 70, is the measured, heartrending story of Tina Hopgood and Anders Larsen, who meet and come to know each other through letters exchanged between her remote English farm and his austere home in Denmark. Tina instigates their correspondence when she writes to the Silkeborg Museum about the Tollund Man, a naturally mummified corpse kept on display there.

(These details are real. The Tollund Man is an uncannily well-preserved body from 250 B.C. that was unearthed from a peat bog on the Jutland peninsula in 1950. He was wearing a cap and had a noose around his neck; his expression was meditative—so much so that it looked like he was slumbering peacefully.)

Anders, a (fictionalized) professor at the Silkeborg Museum, responds to Tina’s letter, and their slow-burning friendship begins. Inquiries and information about the Tollund Man ultimately transition to more personal matters like their marriages, grown children, losses, joys.

Although Tina exists amidst the beauty and hardships of the natural domain, while Anders is devoted to artifacts and manmade objects, the two have much in common. They are exceptionally insightful, and their discourse about the world and how they fit into it is observant as well as tender. They’re also grappling with certain choices they’ve made along the way. “We have both arrived at the same point in our lives,” says Anders. “More behind us than ahead of us. Paths chosen that define us. Enough time left to change.” Within the comfort of their letters, Tina and Anders attempt to resolve the sacrifices they’ve made, while questioning if it’s not too late to undo the effects of them.

Youngson brilliantly unites the mundane details of daily living—like tea cozies, muddy boots, and the items stowed inside a briefcase—with an expansive, generous look at the ways that humans are linked to each other across the millennia.

Meet Me at the Museum is an exquisite gem of a novel about second chances, the ability to transform, and the power of well-chosen words. As Tina and Anders contend with these ideas, the Tollund Man himself remains at the heart of their conversation. “He is, to me, like the gods he believed in,” says Tina. “Someone who lived before me and fought battles and now has wisdom he could impart to me if I could find a way to reach him.”