Map That Changed the World, The

History in the rocks… 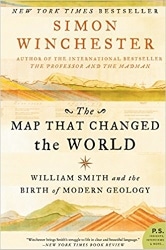 Truth be told, we humans spend most of our lives as two-dimensional creatures.    Having left the trees of our primate ancestors long ago, we’ve spent the past few million years roaming a seemingly flat Earth, rarely having much need for a third spatial dimension.  While we frequently took advantage of valuable commodities under the Earth’s surface – like coal, limestone or precious metals – it wasn’t until about 200 years ago that scientists really started to make sense of the rocks under our feet.  The consensus “father of modern geology”, William Smith was the first man start putting all the puzzle pieces together, bringing Earth’s fascinating third dimension into play.  A former geologist – now an acclaimed journalist and author – Simon Winchester tells the man’s story in The Map That Changed the World. 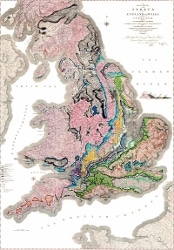 Born in 1769, the son of a humble blacksmith, Smith grew up in Churchill, a small village in Oxfordshire, England.  Trained as a surveyor as a young man, he quickly developed an aptitude for canal building and an avid curiosity for the many layers of rock exposed in the process.  Collecting fossils from the various layers – fossils were a popular hobby in England back then – he slowly learned to identify the same layers of rock at different locations based on the unique assortment of fossils each layer displayed.

Winchester lays out this straightforward story, showing how Smith – traveling many thousands of miles back and forth across England – gradually assembled the pieces that would make up his life’s work:  a detailed geological map of the island of Great Britain. 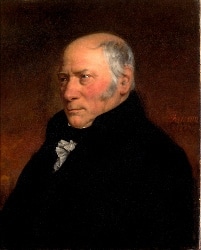 But the story isn’t nearly as simple as it seems, as Smith had to overcome numerous obstacles along the way.  Shunned by the scientific establishment due to his low social standing, he struggled to get his (literally) groundbreaking ideas heard.  He even spent some time in the local debtors’ prison, as he frequently failed to balance his need to actually make a living with his endless passion for rocks and the story they were trying to tell.

While he’s written several – often geologically oriented – books, the London-born, Massachusetts-based Winchester wears his heart on his sleeve with this one.  Clearly a labor of love, it serves as a captivating ode to one of his scientific heroes.  With ample enthusiasm, the author presents a convincing argument that Smith is well worthy of his founding father status and deserves to be remembered as one of England’s great scientific champions.

Before the discipline of geology existed, the valuable rocks, gems and minerals people coveted were found in the Earth wherever God had chosen to put them.  There was no rhyme or reason to it.  It wasn’t until the uniquely perceptive William Smith started obsessively poking around in the dirt that the patterns started to emerge.  It didn’t take long for his observations to find their way into the minds of other scientists – most notably one Mr. Charles Darwin – planting the seeds for a veritable revolution in biology and earth science.  Full of great science and skillful storytelling, The Map That Changed the World is a thoroughly entertaining account of one of England’s most influential scientists.  Highly recommended.

Check out some reviews of other great science biographies:  The Invention of Nature   /   Pilgrim on the Great Bird Continent