Man Who Caught the Storm, The 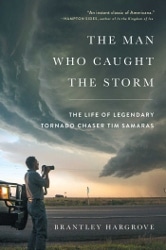 It’s all about the odds.  However you might spend your days – riding a motorcycle in commuter traffic, climbing mountains in remote areas or raising venomous snakes – most us are fortunate enough to beat the odds and live to tell about it.  The risk calculation changes significantly when you chase tornadoes for a hobby.  Pursue enough deadly storms – striving to get as close as possible every time – and you have to figure the odds are going to catch up to you sooner or later.  So it was with a Colorado man named Tim Samaras.  Famous for his role in Storm Chasers on the Discovery Channel, he pushed the limits in the pursuit of scientific knowledge.  Journalist and occasional storm chaser Brantley Hargrove tells his remarkable life story in The Man Who Caught the Storm. 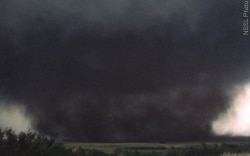 Known as Tornado Alley, spanning much of the central US – particularly the states of Texas, Oklahoma and Kansas – it’s the most tornado prone area on the planet.  When the warm moist air from the Gulf of Mexico slams into the cold dry air from the Rocky Mountains, all sorts of deadly storminess can result.  It’s also where Tim Samaras grew up – in eastern Colorado – and got his first thrilling look at the storms that make the area famous.  His enthusiasm would soon evolve into an obsession, eventually leading him to numerous groundbreaking discoveries, despite the fact that he never went to college. 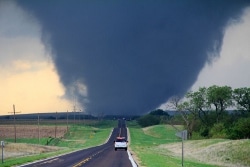 When Hargrove isn’t reveling in stories about Samaras’ knack for solving seemingly insurmountable technical challenges in the lab/garage – how do you get your tornado probe to withstand wind speeds over 200 miles per hour? – he’s chronicling numerous chases in breathtaking detail.  When the chapter title refers to some tiny town you’ve never heard of – say Manchester, South Dakota or Quinter, Kansas – you know there’s going to be trouble.  Not surprisingly, he saves El Reno, Oklahoma for last.   It was there, on May 31st, 2013 that the widest (2.6 miles!) tornado in recorded history touched down and Tim Samaras chased his last storm.

Loaded with technical details and white-knuckle chase scenes, The Man Who Caught the Storm is sure to thrill tornado fanatics or anyone interested in hard core adventure science.  It succeeds as both an honorable biography of a remarkably successful self-taught scientist and a frightening account of some of the scariest weather on the planet.

Check out Dave’s review of another book about Tornado Alley:  Storm Kings.