Man from the Train, The 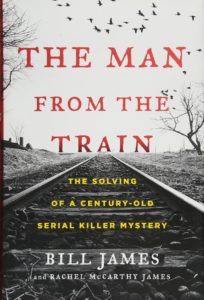 How much murder can you take?  One?  Half a dozen?  How about more than one hundred?  Well, if you’re looking for a way to answer that question, I can think of no better way than to hop on board with The Man from the Train, baseball pundit and murder obsessive Bill James’ fearlessly dreadful murder investigation.  I’ve never read anything quite like it and if you’re into murder, it’s sure to intrigue.

While otherwise minding his own business, probably taking a break from crunching baseball statistics, James was reading about the infamous – and unsolved – murders that took place in Villisca, Iowa in 1912 when he had a small epiphany.  In case you don’t keep a file with all the most horrific cold cases tucked away in the dark recesses of your mind, you’ll want to know that the small town of Villisca is where the bodies of six members of the Moore family and two house guests were found on the morning of June 10, 1912, each of them bludgeoned to death by the blunt side of an ax.  Multiple suspects were investigated, charged and put on trial, but the perpetrator was never brought to justice.  Based simply on the brutal efficiency of the dreadful act, the author was sure that there must be more.  Whoever the murderer was, this couldn’t have been his first one.   There had to be others. 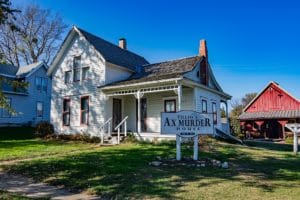 So James went looking.  And with the able research assistance of his daughter Rachel, he found more murders.  And then a few more.  And then even more until he realized that he was able to plausibly link up dozens upon dozens of unsolved murders from all across the country, dating back as far as 1900.  Most of them committed with an ax and most of them within walking distance of the train tracks.

Reveling in the possibility that he was on the trail of America’s most elusive – and most prolific – serial killer more than a century after the fact, James describes each crime, one after the other.  He categorizes them and statistically arranges them, methodically building his argument into an iron-clad monstrosity of murder that is as riveting as it is disturbing.  Proving the adage that the truth is often more horrifying than fiction, it’s hard to imagine a more nightmarish story.  I struggled to read it; I can’t imagine researching and writing it.  I truly hope the author has good mental health insurance coverage.

Now you may not agree with every interpretation or assumption that James throws out there, but he goes out of his way to weigh each piece of evidence with the same statistical rigor that he brings to baseball analysis.  By the time I got to the remarkable big reveal at the end, he had me thoroughly convinced.

Not one for purple prose, James presents his investigation in a matter-of-fact style, sans embellishment, which is scarcely needed as the litany of ax murders is overwhelming enough.  Some readers might find his often lighthearted approach a bit off putting, given that he’s talking about some of the foulest crimes imaginable, but I think the man is simply trying to get to the end of the story without generating too much despair amongst his readers.   If I haven’t made it clear, nothing about this book is for the faint of heart.

Having said all this and quite possibly scared every potential reader away, I must make it clear that I loved The Man from the Train – the book that is.  Maybe that says something worrisome about me, but I found it incredibly riveting and just as disturbing.  As I sit here writing, ruminating and reliving the spine-chilling reading experience, I want to go back and read it again.  It’s that good.  If the true crime genre is your thing, I can’t imagine a book that you could find more creepily satisfying.

Check out some of Dave’s other reviews of books about real-life serial killers:  The Devil in the White City   /   The Killer of Little Shepherds   /   A Serial Killer in Nazi Berlin