Long Way Home: A Boy’s Incredible Journey from India to Australia and Back Again

Going off the rails on a crazy train 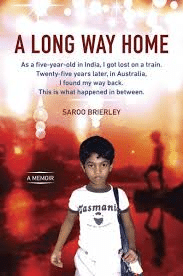 Picture this same five-year-old without money, identification, or the ability to remember his last name.

Now consider that there is no Internet available to track down this five-year-old’s parents, no nightly news to post his little face on a television screen, and no one who notices him as he scavenges around the station for food.

Can you wrap your head around this scenario? Inconceivable, no?

In his gripping memoir, A Long Way Home, currently in theaters as the movie Lion, Saroo Brierly untangles the story of how this very thing happened to him in India in 1987. The tragic circumstances by which he comes to board a train in Burhanpur (located in the western part of India) and then travel 1,680 kilometers east to Kolkata by himself are nothing short of spellbinding.

In warm, spare language that immediately mesmerizes the reader, Brierly starts his almost mythic tale by describing his poverty-stricken childhood in his rural village. He shares memories of his mother, his three siblings, and how they struggle to get by. Brierly’s details are so vivid that I can feel the dust on my feet and the rumble of hunger in my stomach; I can hear the bleating of goats and the wail of Indian music from the town center. By the time his inadvertent train ride begins, Brierly has systematically set the stage for this most daunting and pivotal of moments.

I’m not giving anything away by saying that after arriving in Kolkata, Brierly cannot find his way home. As he wanders the streets, the potential for danger is harrowing: “No one knows how many Indian children have been trafficked into the sex trade or slavery, or even for organs, but all these trades are thriving, with too few officials and too many kids.” He is ultimately adopted by an Australian couple and taken to a new house in a new country, far away.

Fortunately for Brierly, the second half of his memoir doesn’t have the grit and Dickensian feel of the first, but he does a formidable job of conveying how it feels to be dropped into a life that you didn’t necessarily ask for. Make no mistake: his life is a good one, and he is grateful for everything his adoptive parents do for him. In fact, he writes with remarkable tenderness about his mother and father, who help nurture him into a young man who is clearly articulate, gracious and bright.

Yet it comes as no surprise when Brierly decides in his 20s that he wants to find out where he came from. What is surprising is the boundless determination and creativity he employs to piece together his fragile history. You will find yourself rooting for him every step—and flight and train ride—of the way.

Upon closing the cover of this stunning book, I am left with Brierly’s quiet sense of courage and restraint, along with his complete lack of anger and bitterness. “I’ve experienced so many coincidences that I’ve just learned to accept them—even to be grateful for them,” he writes.

To say that Brierly is an inspiration doesn’t come close to conveying what an extraordinary human being he is. And yet, I suppose he’s just like the rest of us, simply wanting to fill in the mysterious holes of his life. Not only does he accomplish this, but he gives the world a beautiful gift in the process. Thank you, Saroo, for sharing your long way home.