Lincoln in the Bardo

A night of mourning… 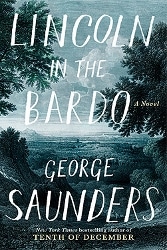 He only made it to age eleven.  Stricken with typhoid fever in early 1862, Willie Lincoln, the older of President Lincoln’s two youngest sons, died in the White House on February 20th, just as the American Civil War was ramping up.  Destroyed by grief, yet engulfed by the commanding duties of an endlessly faltering war campaign, the president would occasionally make late night visits to his son’s resting place in Oak Hill Cemetery in nearby Georgetown.  Inspired by these real life events, acclaimed American author George Saunders has penned his first novel, Lincoln in the Bardo.  It’s a startlingly gripping and imaginative account of one of those nights.

A “place” that many readers might not be familiar with, the bardo is a Buddhist concept that refers to the transitional state between life and death, explored in depth in the Bardo Thodol or The Tibetan Book of the Dead.  Saunders uses a trio of narrators, men who’ve been stuck in this intermediate state for quite some time, to reveal the hidden underworld that surfaces each night in the cemetery.  Working together, often rather tangentially and haphazardly, they celebrate the arrival of the young Mr. Lincoln in their midst and introduce him to many of the other residents, each of them fearful of the unknown verdict that awaits them in the afterlife. 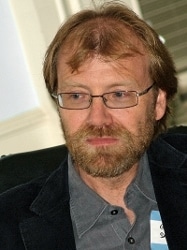 But all of the cemetery’s usual routines are unexpectedly disrupted when President Lincoln appears in the dark of night.  His visit with Willie makes the youngster an instant celebrity amongst the graveyard’s many spirits and demons.  As he quietly says one last goodbye to his son’s lifeless body, the ethereal – and sometimes quite comical – residents gather around, invisible to their gangly visitor. 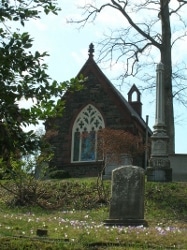 The chapel at Oakhill Cemetery.

Interrupting the cemetery narrative, Saunders frequently adds excerpts from the living world – collected from various Lincoln biographers and observers, both historical and fictional – to provide much necessary context related to the war effort, the Lincoln White House and young Willie’s often rambunctious back story.

Throughout the story, Saunders does a remarkable job of capturing the creepiness of a cemetery in February, in the middle of the night when the ghosts have their way.   From the bare trees flailing in the shadows during a brief storm to the surreal deformities of the decaying and debauched residents, his descriptions often remind me of one of Hieronymus Bosch’s macabre paintings.

But the story is at its most powerful when the spirits directly interact with the president, weaving their way deep into his interstitial spaces, sharing thoughts and emotions with the grieving man.   Saunders’ descriptions of Lincoln’s heartrending interactions with his stoic young son are astonishingly powerful, capturing the humanity of the great man in a way that a conventional history cannot.

Bravely odd, penetratingly eerie and at times devastatingly sad, Lincoln in the Bardo is a consistently compelling piece of experimental historical fiction that was awarded the Man Booker Prize for 2017.  Almost Shakespearean in its tragic expanse, the work imagines one of the most painful nights in the life of an exceptional American hero.  It’s worthy of all the acclaim.