Limits of the Known 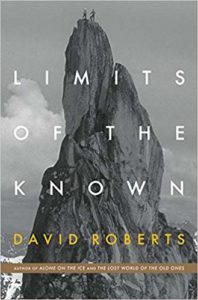 “It’s not like the old days.”  I expect almost every accomplished adventurer – once they’ve gotten old enough – has looked back and noted that today’s explorers have it easy in so many ways.   It’s this kind of sentiment that pushed acclaimed author and mountaineer David Roberts to write Limits of the Known, a look back at some of the great explorers in history and what’s driven them to take such incredible risks.

Very likely approaching his final days on this planet, a recent diagnosis of metastatic throat cancer at the age of 72 has caused Roberts to hang up his climbing ropes and pursue this – potentially his last – literary goal.  As he writes about other great explorers, he spends much of the book looking back at his own incredible career, both as a writer and an explorer. 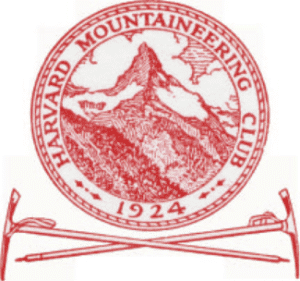 Roberts was the president of the Harvard Mountaineering Club in the 1960s.

It’s not nearly as depressing as it sounds, as the author displays much of the grit that got him out of trouble many times over his career in the wilderness.  While no one would fault him for retiring his computer keyboard as he battles his often debilitating illness, he unflinchingly grabs at his one last opportunity to write about the things he loves.  It’s really quite powerful stuff at times.

As he writes about groundbreaking icons like Norwegian Fridtjof Nansen, who attempted to reach the North Pole in the 1890s, or Brit Eric Shipton, who explored the Karakorum Range in northern Pakistan in 1937, Roberts frequently notes how feats of this profoundly isolating nature really aren’t possible anymore.  In the present day, no one is going to forego GPS technology or air rescue when exploring the poles or the darkest jungles.  While using technology to decrease one’s risk has always been a part of adventuring, there’s no doubt that it depletes the frisson of accomplishment that is the result of a successful journey. 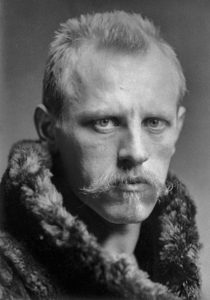 Roberts goes on to include several other kinds of adventure in this tour of the many ways to get yourself killed.  Whether he’s writing about prehistoric rock climbers in the American Southwest, whitewater rafters in Papua New Guinea or cave divers in the Yucatan, Roberts clearly enjoys this kind of storytelling, repeatedly displaying the literary skills that have made his many books so popular over the decades.

Frequently waxing philosophically, rarely curmudgeonly, Roberts uses the adventures of others as a launching pad to reminisce about his own exploits with the longing and nostalgia that accompanies the end of well-lived life.  The author’s continued efforts to share his thoughts one last time with his many fans and supporters borders on the heroic at times.

Adventure stories have always been popular, but it wasn’t until recently that adventure writing has become an actual art form, focusing on the writing as much as the adventure.  David Roberts may have more to do with that development than anyone else.  Limits of the Known is a wonderfully conceived closing argument for that claim.  Both a poignant memoir and a thrilling look at the history of exploration, it’s sure to inspire anyone who enjoys a high-stakes adventure.