Lifespan of a Fact, The

Is the truth truer than fiction? 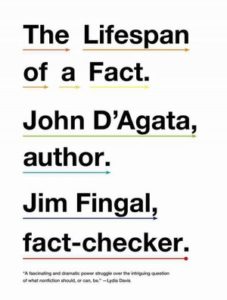 What the heck is “nonfiction” supposed to be anyway?  What a lousy term.  Do purveyors of this genre claim to have some unerring route to the truth that they present to the reader?  We may all agree that fiction doesn’t have any rules.  But if that’s the case, what rules govern nonfiction?  If you think about it there really aren’t any and I’ve never seen that argument more vividly displayed than in The Lifespan of a Fact.  It’s a convoluted often rather ill spirited quarrel between two otherwise civilized individuals.   It’s also a lot more entertaining than you might think.

John D’Agata is a critically acclaimed author who was commissioned by Harper’s Magazine to write an essay about the 2002 death by suicide of a young man in Las Vegas.  He submitted the essay in 2003, but it was rejected due to creative differences.  He then submitted the work to The Believer who assigned a young man named Jim Fingal to perform some detailed “fact” checking.  Several years of arguing ensued – the essay was finally published in 2010 – and it’s these often heated disagreements that make up meat of this 2012 book.

At first it seems like Fingal is just an annoying, trivial and tireless nitpicker, pointing out that the mobile dog grooming vans that D’Agata mentions are actually pink rather than purple, for example.  But as the clash becomes more intense, it becomes increasingly clear that D’Agata’s definition of the word “fact” isn’t quite what you might expect.

And it’s this blurring of the line between fiction and nonfiction that is revisited time and again.  D’Agata refuses to even use the term “nonfiction”, given that it suggests something that can’t actually be delivered.   He prefers to call himself an essayist – a vocation that has been around hundreds of years longer than nonfiction writer – whose job is to present an entertaining take on worldly events.  He’s supposed to write about his own experiences and speculate about other experiences based on the available evidence.  He’s supposed to create a feeling – a literary event.

But Fingal doesn’t give up easy, despite being outgunned from the outset.  D’Agata is older and presumably wiser and has clearly thought his way through these issues for years, yet Fingal fights on gamely, pointing out the repeated instances where D’Agata seems to make up facts – even quotes (!) – out of thin air.  Which facts are crucial?  Which ones are trivial?  Does each writer get to decide for him or herself?  Are there unwritten rules?  Should there be?

It’s a remarkably entertaining trip down a dark hole that presents the reader – particularly fans of the burgeoning genre of narrative nonfiction – with countless unanswerable, but still very important questions.   In the end, it’s clear that both men are given impossible tasks.  One is to seek meaning in the inexplicable suicide of a young man in Las Vegas, Nevada.  The other is to make sure that all the “factual” information in the resulting essay is perfectly accurate.  What’s most important?  Or what matters most?  Facts or feelings?

Irreparably muddling the difference between fiction and nonfiction and revealing the inherently subjective and artistic nature of all writing, The Lifespan of a Fact has generated extensive critical acclaim.  It even served as the inspiration for a 2018 Broadway play.  It’s bound to make nonfiction fans uncomfortable as it ruthlessly exposes the core myths that seemed to define the genre.  But as with all myth busting, the reader is stronger having looked thoughtfully behind the curtain.