Last Days of Night, The

An illuminating look at the compulsion of invention 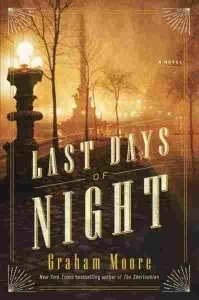 I was an English major. If you ask me how electricity is generated, you will hear crickets chirping.

I don’t grasp the principles of electricity, and to be honest I don’t give them much thought. (As long as I have a working lamp on my bedside table so I can read at night, I’m good, thank you.)  How is it, then, that I could not put down Graham Moore’s The Last Days of Night?

This historical novel about electricity—yes, really—is briskly moving and entirely engrossing. It breaks down the real-life drama behind U.S. Patent #233,898, otherwise known as the patent for the incandescent light: “The whole of the thing was fewer than one thousand words. To think of what legal warfare those few words had birthed.”

The book centers on Paul Cravath, a young Juris Doctor from Columbia Law School who is “confident, collected, energetically eager.” Through a strange confluence of events, he ends up assuming the formidable task of representing scientist and inventor George Westinghouse. Westinghouse has been sued by Thomas Edison, because the two can’t seem to agree on which of them invented the light bulb first. Their mushrooming disagreement is both captivating and a train wreck waiting to happen.

Moore is superb at conjuring up America in the late 1880s. His whip-smart cast of characters, which includes other notable figures like Alexander Graham Bell, J.P. Morgan and Nikola Tesla, takes us on a wild ride through a nation bursting at the seams to discover, invent, and create. They travel from New York City to Nashville, from science lab to dinner party, and we feel their sense of urgency as, one by one, light bulbs replace gas lamps, forever altering our country’s landscape. 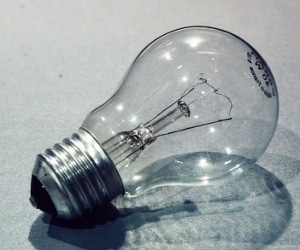 It seems so simple now, but oh, the intrigue it caused!

The very young and very gifted Moore, who wrote the Academy Award-winning adapted screenplay for The Imitation Game, is able to bestow exquisite detail on the subject of electricity without alienating readers who aren’t science-minded. He accomplishes this feat by depicting scenes—like a man getting electrocuted on a city street—that are vivid and arresting: “This was like no fire they’d ever witnessed. This was electricity. And the dark marvel of man-made lightning was as mysterious and incomprehensible as an Old Testament plague.”

I like that Moore begins each chapter with a relevant quote about technology and innovation. These quotes come from a variety of sources, from old-school pioneers in engineering to modern-day luminaries like Bill Gates and Tim Berners-Lee. By including these thoughtfully chosen lines, Moore reminds us that our country’s advancements have piggy-backed on each other over many years, creating a spellbinding and messy web of competition and drive. Even an English major can find herself in awe of that.