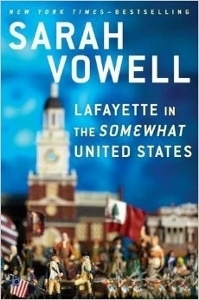 Everyone knows that George Washington was the “father of his country”. Moreover, based on his leadership skills during the American Revolution, he’s since been described as “the indispensable man”.  But while his brand has remained untarnished over the past 200 plus years, there are those who would like to forget that there were other indispensable men involved in that war of rebellion.  Perhaps most notable on this short list was a 19 year-old Frenchman, the Marquis de Lafayette, who enthusiastically sailed across the Atlantic in 1777 to join the fledgling United States in its efforts toward freedom from British monarchy.  Best-selling historical humorist Sarah Vowell tells the young man’s story in Lafayette in the Somewhat United States.

Motivated by the persistent push for “freedom fries” by proponents of GW Bush’s war in Iraq, Vowell tells of a different time, when the French were our essential allies. She makes it clear that no one was more important in fostering this relationship than the precocious Lafayette.  Fearlessly dedicating his life to the cause of American independence, he became close friends with Washington and Jefferson, fought in numerous battles and went on to become a major celebrity in the US, particularly upon a return visit to the country in 1824. 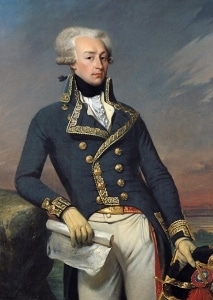 Lafayette circa 1791, by Joseph-Désiré Court.

Despite her frequent humorous asides, Vowell doesn’t hesitate to fix the bayonet, whether she’s skewering modern-day reactionaries or discussing the substantial role that the issue of slavery played in the founding of the United States. 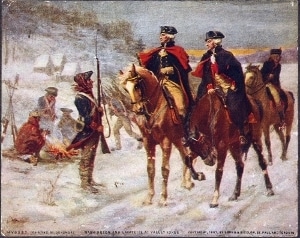 As she’s displayed in her other historical works, Vowell has a unique approach to American history with frequent and entertaining tangential peregrinations. Anyone who enjoyed Unfamiliar Fishes or Assassination Vacation will find this latest work to be equally atypical.  Leaving all history conventions behind – like a table of contents, chapters or an index – she writes about what interests her, which is plenty.  You may think it strange that Ferris Bueller appears in this history of the American Revolution, but when Sarah Vowell’s telling the story, it makes perfect sense.

An amusingly engaging and wide-ranging presentation of America’s early history from a French perspective, Lafayette in the Somewhat United States is exactly what I expected.  Even though she doesn’t sport a PhD and doesn’t hold a professorship at a major university, Vowell’s not afraid to explore and analyze American history on her own.  The result is a thoughtful and entertaining reboot of America’s somewhat inspiring birth story.