Know My Name: A Memoir

From humiliation to reclamation: Chanel Miller sheds her “Emily Doe” anonymity and gives a voice to victims of sexual assault 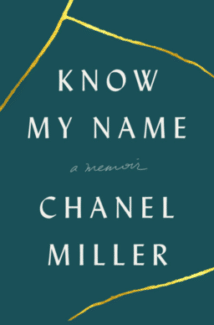 The deceptively simple front cover of Chanel Miller’s Know My Name was inspired by the Japanese art of kintsugi.

Kintsugi is the technique of gluing shattered fragments of pottery back together using lacquer and powdered gold, silver, or platinum. The breaks and imperfections are not concealed; rather, they are celebrated as something new and beautiful in their own right.

It’s obvious that Miller herself is a work of kintsugi. An exquisite one, at that. First, she was one thing: an artistic young college grad from Palo Alto, eager to take on the world. Then, she was something entirely different: a rape survivor dragged through a protracted court system while being ripped apart by social media.

Although her story is deeply unsettling, Miller has emerged now that it’s over (but, honestly, will it ever be “over”?), and she is stunning. Her fissures, magnificent.

You might have heard about Miller—referred to as Emily Doe—during the trial for her 2015 sexual assault. She and her younger sister attended a frat party at Stanford University, where she was raped by a “promising” freshman from the swim team. He left her half-naked behind a dumpster and tried to flee but was tackled and restrained by two passersby. When Miller awoke at the hospital, she didn’t remember what had transpired, but she later estimated that nearly fifteen men had seen her naked body while she was unconscious.

Miller was not eager to be known as a “Victim,” nor was she given sufficient information or preparation for what was to come, but she chose to press charges against Brock Turner anyway. She was on-call for court (which moved as quickly as a glacier), suffered from debilitating anxiety, and ultimately depleted her bank account. Her health, relationships and career all suffered, but she managed to find her voice against the odds.

“How old are you?” she was asked by the defense attorney. “How much do you weigh? What did you eat that day?… What does this text mean? … Did you drink in college?… Are you serious with your boyfriend?” Miller answered all these questions and a thousand more—and then she documented her experiences in unflinching, unsentimental detail. “I had to hold on to my story, figure out how to make myself heard. If I didn’t break out, I’d become a statistic.”

Miller wrote a victim impact statement that she read aloud to Turner in the courtroom. After being published by Buzzfeed and generating more than 15 million hits in five days, it became the launchpad for Know My Name. Vulnerable, courageous and relevant, Miller’s words now serve as a rallying cry for women across the world fighting to be humanized. “You can’t kiss without asking, can’t grab a pussy, can’t mask what you’re doing, can’t turn off the mic, can’t wave it away, can’t make us forget.”

Giving five stars to Know My Name feels woefully inadequate. Instead, I wish for every copy of Chanel Miller’s book to be sold, read, clasped to one’s chest in gratitude, and then pushed into somebody else’s hands so the process can repeat itself, over and over.

Maybe then, we can begin to chip away at the sexism and oppression that so often go unquestioned in our society. “We don’t fight for our own happy endings,” says Miller. “We fight to say you can’t. We fight for accountability. We fight to establish precedent. We fight because we pray we’ll be the last ones to feel this kind of pain.”