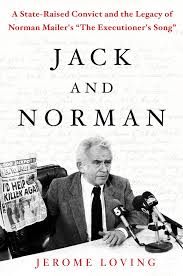 To say he left a problematic legacy is probably a bit of an understatement.  Yet there’s no denying that Norman Mailer was one of the most successful and critically acclaimed writers in the second half of the 20th century.  At times sexist, other times racist, Mailer’s literary efforts received extensive criticism both before and after his death in 2007.  But it was when he was glamorizing the lives of murderers that he got himself into the most trouble.  In Jack and Norman, literary critic Jerome Loving tells of one of those murderers and a friendship gone terribly wrong.

While writing The Executioner’s Song in 1978, which capitalized on the international attention generated by the state of Utah’s execution of condemned murderer Gary Gilmore, Mailer was contacted from prison by a convict named Jack Abbott, a man whose violent life story was oddly similar to Gilmore’s.  Mailer was impressed by the man’s self-taught literary skills, and the two would go on to correspond extensively by mail.  Eventually, with Mailer’s assistance, Abbott published In the Belly of the Beast, an account of his many years in the US penal system.  The book received wide-ranging critical acclaim and coincided with Abbott’s release on parole in 1981.  Mailer would play an influential role in promoting Abbott’s freedom, which proved to be a disastrous decision, as Abbott would go on to stab a man to death less than a month after his release.

Loving, an English professor at Texas A & M, explores this odd literary relationship in great detail, uncovering the many parallels between the lives of the Mailer and Abbott.  While Mailer recognized that in writing about Gilmore he risked glamorizing the murderer’s life, it didn’t really slow him down.  In a similar way, the author also displayed blindness to Abbott’s violent tendencies.  Loving digs deeply into this well-intentioned – eventually fatal – flaw in Mailer’s personality, creating a less than flattering, yet entirely interesting profile of the man in the process.

Nicely evoking some of the more unusual themes of the 1970s, Loving does a fine job of weaving together a bizarre tapestry of murder and literature.  Even though the man was dead, Gilmore’s legacy of violence would carry on through the unique relationship of Abbott and Mailer.  The stories of the three men orbit each other continuously throughout the book, creating odd moments of both hubris and tragedy.   Loving also presents some of the history of the US penal system which had such a significant impact on the lives of both Gilmore and Abbott – and eventually on Mailer’s, as well.

An intriguing dual biography of two talented, but flawed, men – one an acclaimed author, the other a violent, life long criminal – Jack and Norman presents the unfortunate reverberations that followed the publication of The Executioner’s Song.   While I don’t think it’s entirely necessary to have read Mailer’s massive “true life novel” to enjoy this work, it certainly is important to have some familiarity with Gary Gilmore’s final days.  Recommended for those looking to learn more about Norman Mailer or for anyone who enjoys bizarre true-life stories.

Check out Dave’s review of The Executioner’s Song here.