Island of the Blue Foxes 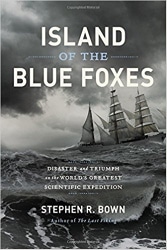 The overused adjective “great” doesn’t really do it justice.  Despite the rather stale name, The Great Northern Expedition is rightly regarded as the most impressive scientific endeavor in the history of European exploration.  Credited with mapping much of eastern Siberia and northwestern North America, the quest was remarkable for many reasons.  In Island of the Blue Foxes, Canadian history writer Stephen R. Bown tells of this dangerous quest for geographic and economic greatness.

First envisioned by Peter the Great, shortly before his death in 1725, the expedition spanned the years 1733-1743, and given the significance of its accomplishments – and its substantial drain on the Russian government’s budget – it should have been viewed as a bigger deal.   But the most prominent heroes of this epic quest weren’t Russian.  Vitus Bering was Danish and Georg Steller was German.  While more than 3,000 individuals were involved in this gargantuan undertaking, history has viewed these two men as the most notable.  As much a double biography as it is an adventure story, the book reveals why their efforts were so important. 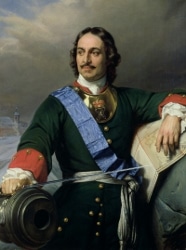 Starting in St Petersburg, the explorers first had to find their way across the uncharted wastes of Siberia to the Pacific, bringing all their ship building essentials with them.  Upon arrival on the coast they recruited (or enslaved) the locals to assist with building and stocking the ships they needed before actually starting any sea voyages.  From there it was the simple matter of sailing around the Kamchatka Peninsula, braving the fearsome conditions of the North Pacific and looking for routes to Japan and North America and randomly searching for various other mythical lands.

Piecing together a gripping story from many disparate sources, Bown’s account is consistently engaging, detailing much of went into the Russian “discovery” of Alaska.  Unfortunately, this singular event would soon have a disastrous impact on the many unsuspecting marine mammals that happened to peacefully subsist in the northernmost reaches of Pacific. 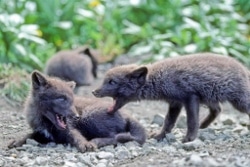 When they’re eventually put down on paper years after the fact, many adventure stories receive an extra coat of heroism, often minimizing the many hazards and travails involved.  But Bown revels in detailing the down side.  From the treacherous multi-year crossing of most of the Eurasian landmass – from St Petersburg to Okhotsk, a forbidding 206 hour road trip in light traffic today – to the depredations of omnipresent scurvy, the author captures much of the misery of 18th century land and sea exploration.  In my reading of such things, it’s rarely observed how awful the economic prospects of the average bloke must have been for so many of them to volunteer for such deplorably dangerous voyages.

Spanning three continents, consuming ten years of often tragic travails and featuring two of history’s great explorers, this massive – but little known – Russian expedition offers plenty of opportunities for fascinating storytelling.  And in Island of the Blue Foxes, author Bown undeniably makes the most of it.  Highly recommended for anyone who enjoys exciting adventure writing.

Check out our reviews of other Bown books:   The Last Viking   /   Scurvy

More reviews of other books about Arctic and Antarctic exploration:   In the Kingdom of Ice   /   Alone on the Ice