Into the Raging Sea 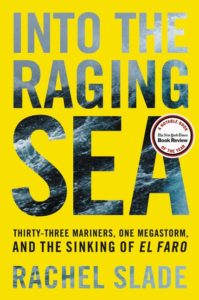 Timing was everything.  On a run from Jacksonville, Florida to San Juan, Puerto Rico, it would typically take the 791-foot cargo ship SS El Faro less than three days to sail from port to port.  There’s really nothing in the way.  But that wasn’t quite true when the ship – fully loaded with large containers – left Florida on its final voyage on September 29th, 2015.  A storm – soon to be declared hurricane – named Joaquin was headed right toward their path.  In a tense and riveting account, journalist Rachel Slade tells the true story of this tragic game of chicken in Into the Raging Sea. Slade uses the first part of the book to piece together all the details of the 40 year-old ship’s final days, not an easy task when there were no survivors of the tragic event and most of the evidence lies three miles underwater on the ocean floor just east of the Bahamas.   But despite those formidable obstacles, she manages to create compelling sketches of the major players, based on interviews with family and friends.  She also makes the most out of a recording of the final 26 hours of dialogue from the ship’s bridge, building a remarkably tight narrative. 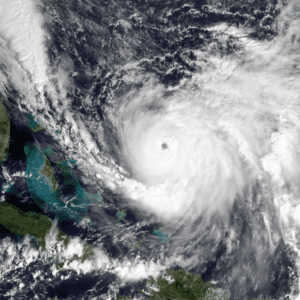 Hurricane Joaquin at its peak.

As the storm and dramatic tension build, the author interrupts the tale occasionally to provide useful backstory about the history of the shipping industry, focusing on the constant conflict between big business motivated by profit and the governmental regulators motivated by safety.    She also speaks of the historic battles between big business and the labor unions that shaped the modern shipping industry.

In the second half of the book, Slade talks about the heroic efforts that were required to try and rescue the ship and determine what went so terribly wrong.  This section also includes a rather convincing dismantling of the big business bean counters who prioritize profits and schedules over the safety of the crew.

My only disappointment was the absence of deeper speculation about Captain Michael Davidson, the man literally in the center of the storm.  What was his motivation?  Was it incompetence, hubris, or insanity that caused him to sail his aging ship into the center of a massive storm?  We’ll obviously never really know, but I would have liked to read more of Slade’s take on these deadly questions.

Even just a few hours in either direction might have resulted in different outcome.  Unfortunately, time is money in the shipping business and 33 brave individuals lost their lives serving that master.  Well told and riveting throughout, Into the Raging Sea reveals how even with modern satellite weather forecasting, reliable communications and sophisticated navigational tools, even a massive cargo ship is no match for Mother Nature at her most violent.

Check out some of Dave’s reviews of books about other modern disasters:  The Perfect Storm   /   Flight 232   /   Deep Down Dark