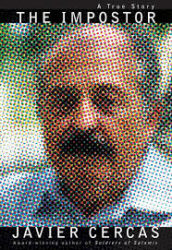 How do you tell a true story?  When push comes to shove, how do you decide what the truth is?  Especially when you’re writing about a compulsive liar.  This is the dilemma Spanish novelist Javier Cercas faces when he reluctantly decides to tell the true story of Enric Marco.  It’s aptly titled The Imposter and it’s an entirely captivating dive into the often nebulous gap between truth and fiction.

He was one of Spain’s most popular and esteemed heroes.  Following the country’s transition from fascism to democracy in the late 1970s, Enric Marco gradually rose to prominence, aided by his remarkable life story.  Born in Barcelona in 1921, he was a teenager during the Spanish Civil War, risking his life in opposition to the eventually victorious fascists.  He was subsequently imprisoned in Flossenbürg, a concentration camp in Nazi Germany, where he worked as a slave laborer until the end of World War II. When he returned to Spain, he resumed his covert opposition to Franco’s authoritarian regime until the tyrant finally passed away in 1975. Marco was then able to become more open in his untiring efforts toward justice and the public good, eventually receiving the Creu de Sant Jordi in 2001, one of the highest civilian honors in the Catalonian community. 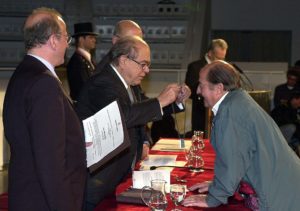 However, in May 2005 it all came tumbling down.  When a curious historian discovered that Marco had actually never set foot in Flossenbürg, Germany, his countless additional lies were subsequently revealed.  Starting in the 1970s – shortly after turning fifty – Marco had gradually fabricated an entirely fictitious life story that he continually polished and refined, year after year, using it as his most effective tool in his rise to national prominence.  Already a successful novelist at the time, Cercas was unable to resist the intrigue.  What would cause a man to commit such fraudulent acts?  How can we possibly understand the life of Enric Marco?  Moreover, how do you tell a man’s story without ultimately condoning his acts, however inadvertently?

After several false starts, Cercas eventually takes the plunge and begins to dig into the bizarre and complicated life of Enric Marco, eventually completing the work in 2014.  The English translation was published in 2017.  Aided by his son Raül, the author recorded a series of interviews with the seemingly ageless Marco – now a pariah in his homeland – finding him just as crafty and manipulative as ever.  This subtle, but omnipresent, struggle between the 50-something interviewer and the 90-something con man creates a riveting tension throughout the book.

Cercas calls it “a novel without fiction”, but the publisher makes it very clear – right on the cover of the book – that this is a true story and the author has clearly gone to great lengths to unearth as many corroborating artifacts and individuals as he can.  Frequently returning to the opposing ideas of fiction and reality, the author effectively uses the dichotomy to explore Marco’s predicament.  Is Marco just a novelist who uses real life as his medium rather than the pen or computer keyboard?  Is there really a difference?

There are many ways to justify a lie and Marco is clearly a master of all of them.  Does your lie further society’s greater good?  Does it assist in the creation of a work of art?  Does your lie really hurt anyone?  Cercas explores these ideas in a way that makes for insightful and consistently riveting reading.  Early in his career, the author initially rose to fame for a work of historical fiction.  Begging the question, if a novelist can make up his own version of history, why can’t Enric Marco?

As I’ve already alluded to, Cercas includes many of his own trials and tribulations throughout the book.   Full of self-doubt about the advisability of such a potentially flammable project – how do you try and understand a man without exonerating him? – his struggles add an additional intriguing layer to the story.  His efforts to reconcile the two realms – truth and fiction – bring the book to a profound and ultimately successful culmination.

As much a true crime drama as it is a biography, The Imposter is a consistently compelling chronicle that had me in its tight grasp from beginning to end.   All on its own, the audacious pathology of Enric Marco makes for quite a story, particularly when it’s viewed from a post-2016 political perspective in the United States.  But it’s really Cercas’ gifts as a novelist – one who’s not afraid to dig deeply into the blurry zone between truth and fiction – that elevate the book to greatness.  I couldn’t recommend it more highly.