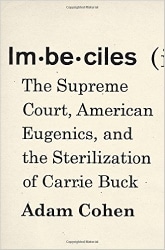 It was a mismatch of profoundly appalling proportions. In one corner was the esteemed 86 year-old Oliver Wendell Holmes, Jr., the most acclaimed Supreme Court justice in US history.  In the other corner – with no legal defense to speak of – was Carrie Buck, a poor, 20 year-old, single, unemployed, mother of one with a sixth grade education.  The contest played out in 1927, when Holmes wrote the 8-1 majority opinion that allowed the state of Virginia to surgically sterilize Ms. Buck without her consent, simply because she wasn’t intelligent enough. Forever known as Buck v. Bell, it was quite possibly the foulest moment in American legal history.  Effectively and compellingly, journalist and Harvard Law School graduate Adam Cohen uncovers all the vile details behind this miscarriage of justice in Imbeciles.

Known as the Virginia Sterilization Act of 1924, it was the crowning achievement of the eugenics movement, which sought to improve the vigor of the American gene pool by selective sterilization. According to leading eugenicists of the day, there were a lot of people on the “undesirable” list who shouldn’t be allowed to reproduce.  More than just the supposedly “feeble-minded”, like Carrie Buck, but also Jews, Italians, Blacks, Eastern Europeans, Asians, Mexicans, Native Americans, the physically handicapped and so on.  Hyperventilating experts preached that as many as 15 million Americans – 10% of the population – constituted a danger to the gene pool, threatening the very fabric of society. 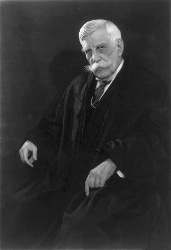 While the science was suspect – a convenient misapplication of the discoveries of Darwin and Mendel – the eugenics crusade succeeded because it was built on a rare alliance between two disparate political movements. The progressives, who wanted to make the world a better place by applying the latest knowledge in genetics; and the conservatives, who wanted to keep American society’s newest and lowliest members in their place.  The two poles of the political spectrum came together in their effort to protect the genetic purity of the “original” Americans of British and northern European stock, producing similar sterilization laws in many states.  As a result of the Buck v. Bell decision, thousands of men and women in similar situations would be surgically sterilized by their respective state governments over the ensuing decades.

With passion and an exacting critical eye, Cohen tells how this popular movement of scientific delusion developed during the early 20th century and managed to capture the unassuming Carrie Buck in its crosshairs, despite the fact that she was completely innocent of any wrongdoing and was of relatively normal intelligence.  The author provides astute legal analysis of every step of the process, pointedly revealing how completely Ms. Buck’s legal representation failed her and how the entire US Supreme Court managed to leave such a dark and foul stain on its history.  The cruelty, misanthropy and moral immaturity of Justice Holmes is featured prominently, running counter to the usual historical adoration of the man.

In his introductory remarks, Cohen comments on the astounding power imbalance that existed between Carrie Buck and the members of the legal and scientific community who carried out this dreadful act of injustice. He states that it was one of the main things that motivated him to write the book.  It’s easy for the modern 21st century reader to think that much has changed in the ensuing 90 years.  But as I read the book, I couldn’t stop thinking of the Netflix’s 2015 legal documentary, Making a Murderer, which presents a similar story of injustice with a similar intensity .  Even in the present day, defense lawyers collude with the prosecution when there’s an opportunity to keep “other” people in their place.  If Steven Avery and Brenden Dassey’s story captured your attention, this effectively and powerfully told story is likely to as well.

An honorable account of one young woman’s tragic encounter with the unrestrained power of the legal establishment, Imbeciles sets the record straight, long after the fact.  A victim in so many ways, Carrie Buck deserves to be more than just a legal footnote in history.  Cohen’s thoughtful and comprehensively researched chronicle helps make sure that her story will not be forgotten and provides some well-deserved and long-delayed justice.  Five righteous stars.