I’ll Take You There

Don’t take me there 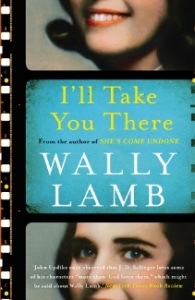 To give a Wally Lamb book anything less than five stars is like a dagger through my heart.

For more than twenty years, I have devoured his expansive, articulate and exquisitely written novels, and I’ve never been disappointed—until now.

His newest book, I’ll Take You There, is a jarring departure from what I’ve come to expect from Lamb, who has crafted engrossing plotlines and tragic, endearing characters in She’s Come Undone

, I Know This Much Is True

, and The Hour I First Believed

I’ll Take You There features 60-year-old Felix Funicello, a film scholar who runs a Monday night movie club in an old theater in his Connecticut town. Rumor has it the theater is haunted, which Felix glibly dismisses until one evening when he is visited by the spirits of film legends Lois Weber and Billie Dove.

[Insert the sound of me choking on my coffee.]

Ghosts? In a Wally Lamb novel? Is this a joke?

Felix wonders if his drive-thru coffee has been laced with LSD, but (unfortunately for us) he is not hallucinating. Lois and Billie enjoy a ridiculously long-winded conversation with him about the history of American film-making before they deign to explain their disturbing (to me, anyway) presence.

The ghosts present Felix with a few dozen old-school film canisters, dated 1959, 1965 and so on. “Welcome to your life,” Lois says. “Films such as these are usually only available to those of us who have crossed over, but I’ve pulled some strings, called in some favors from the higher-ups, and an exception has been made.”

As it turns out, Felix is not only able to watch these films, which contain footage from his childhood, but he can also reenter his past. “To access this feature, just walk up onto the stage while the film is playing, then face the screen and touch it gently with your fingertips,” Lois instructs. This is the precise moment when Lamb loses me. I don’t understand if he’s trying to be humorous or clever here; it only comes across as gimmicky, and I do not like gimmicks in my literary fiction.

When Felix finally gets around to asking the ghosts why they have picked him to visit, they say it’s because he’s “educable.” Lois explains, “You’ve been chosen because you grew up with sisters, Felix, and because you are the father of a young woman who has entered the fray of modern life. We feel you have great potential.”

Before I’m able to get a good sense of what this “potential” is all about, Lois and Billie switch on the first film, which features Felix as a six-year-old. We meet his parents and two older sisters and are treated to an overly sentimental walk down memory lane. More than once I found myself wondering if I should quit the book or keep reading.

Ultimately, I stayed with it. I’m glad I did for the simple reason that we come to learn how dysfunctional the Funicellos are. In fact, it’s in this dysfunction where Lamb shines as a storyteller: he is so good at peeling back the layers of a family to reveal the mistakes and catastrophes hidden beneath. He meticulously shows how the Funicellos fall apart, and he meticulously shows how they become whole again.

The Funicellos’ story is disturbing and lovely and a sign of the times. It certainly stands on its own, so why are there ghosts hanging around to muck it up? Lois and Billie’s inane presence—coupled with Felix’s moving in and out of the screen—completely detracts from the soul of the novel. I wish Lamb had focused solely on the Funicellos’ tragedy, because it would have been a perfect little jewel all on its own.

As for Felix being “educable” and having “great potential,” it becomes clear that he respects strong women and has an openness to feminism; I’m assuming this is what Lois and Billie are referring to. He witnesses his sisters, mother and daughter grapple with things like gender roles, body image, beauty pageants and pregnancy (wanted and otherwise). His empathy toward them is touching, but I’m not sure what overarching point Lamb is trying to make. If anything, Felix only comes across as sounding preachy to the reader, which makes the novel even more difficult to embrace.

For all that I’ll Take You There heaves at us in terms of films, family and feminism, Felix brings the book to a close with a couple syrupy pages about the wisdom he has gleaned through the years, including one paragraph that makes me cringe: “So what do I believe in? Equality. Forgiveness. Compassion. Social justice. I believe in the value of family, whether you define it as your blood relatives or the people you draw to you—which is to say that I believe in love.”

Felix also admits that he now believes in ghosts. I find this point amusing, because by the end of the book Lois and Billie have (bizarrely) disappeared from the theater and the novel with no explanation whatsoever.

All I can say is good riddance.