A black life that mattered… 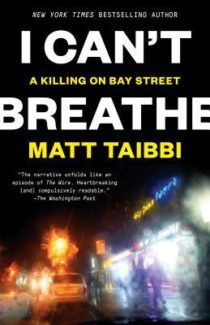 This is a hard book review for me to write.  I’ve never been to New York City.  I don’t know what it’s like to hang out on the streets of Staten Island.  Obviously, I’ve never had any interaction with the NY Police Department.  Everything I “know” comes from watching TV shows, clearly not the best way to learn about a topic.  But what I do know is that Matt Taibbi is a hell of a journalist and I Can’t Breathe is just one more piece of evidence to support that claim.

Taibbi takes a long and deeply immersive look into the life and death of Eric Garner, a 43 year-old African-American man who died on July 17, 2014, shortly after being placed in a chokehold by an NYPD officer.  He was under suspicion for illegally selling cigarettes.   Garner’s death sparked outrage across the nation, playing a key role in the nascent Black Lives Matter movement. 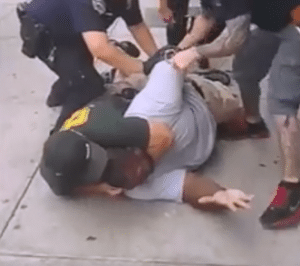 From beginning to end, the book is packed with incredible journalism.  Taibbi deftly pulls together the perspectives of various members of Garner’s circle of family, friends and co-conspirators.  He also includes the stories of other victims of police violence in America, effectively pointing out that Garner’s murder was not unusual in the slightest.

Clearly, anyone who claims to be objective on this topic is either lying or deluded, so the author makes no such claims.  But that allows him to explore Garner’s life and the lives of other victims like him without restraints.  Those who know a lot more than I do can argue about whether Taibbi’s take on this incendiary topic is accurate or fair or sufficiently balanced, but I found every bit of it compelling and often powerful.

It’s one of the defining issues of our time:  police brutality and in particular the singling out of black men.  Unfortunately, there are thousands of similar stories that could be told.  Taibbi focuses on just a few of them, capturing the injustice and appalling normalcy of it all with remarkable restraint.  The book is sure to outrage, but it will also inform.   It’s obvious that many things have been written about Eric Garner since the day he was murdered.  If I had read them all I could confidently say that I Can’t Breathe is one of the best.  You’ll have to judge for yourself, but I can’t recommend it more highly.