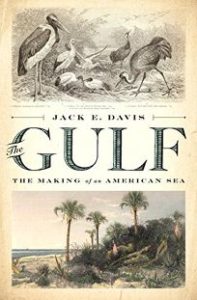 I live on the gulf.  Even though my hometown is about a thousand miles away from the salty shoreline of the Gulf of Mexico, every time I wash my car, water my garden or flush my toilet I’m contributing to what eventually ends up there.  That’s the case for everyone who lives in the massive midsection of the US that makes up the gulf’s watershed.  Serving stoically, the gulf obliges as the final drainage dump for about 60% of the area of the contiguous 48 states.  Unfortunately, it can only handle so much abuse and over the past several decades – due to countless insults, large and small – it’s been starting to suffer.  Sometimes more eulogy than subtropical biography, The Gulf is a really interesting story about this unique part of the Atlantic Ocean and historian Jack E. Davis tells if exceedingly well.

Starting at the beginning, Davis tells of the many different aboriginal peoples that called the gulf coast home prior to the arrival of the Spanish conquistadors.  As with the European invasions elsewhere on the continent, the competence displayed by the natives is remarkable when compared to the ineptitude displayed by the Spanish.  The contrast would actually be rather humorous, if it wasn’t for the many Old World diseases that proceeded to decimate each of the native populations, one after the other, making it much easier for the Spanish, the French and eventually the Americans to accomplish their goals of conquest. 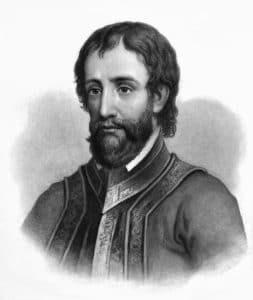 Hernando de Soto explored much of the gulf coast from 1539 until his death in 1541.

Maybe all history at its core is depressing – or maybe I was just having a bad week when I read this book – but the litany of humanitarian and environmental destruction continues apace.  The fishermen destroy the marine life; the feather collectors kill (almost) every last snowy egret; and the oil industry pollutes anything left behind.   And don’t forget that everyone in the booming population centers along the Ohio, Mississippi and Missouri rivers are still flushing their toilets and fertilizing their fields, creating a marine dead zone as big as the state of New Jersey that’s straight out of some ecological horror movie. 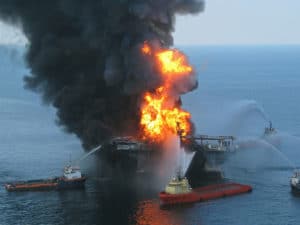 The Deepwater Horizon oil rig burns after the disastrous 2010 explosion.

Somehow, Davis keeps the narrative from getting too depressing – he’s obviously better at that than I am – and redirects the story to the growth of the American environmental movement in the ‘60s and ‘70s, much of which took place along the gulf’s shores.  From wildlife preservation to shoreline restoration, he shares numerous stories about individuals who’ve made a difference in their efforts to bring back some of the gulf’s original natural beauty.

As I’ve already hinted, The Gulf can be painful to read at times.  It repeatedly extols the beauty of this amazing natural place and then proceeds to document the myriad ways that humans have managed to destroy it.  It’s a sweeping journey over the centuries and Davis encapsulates the entire saga into a wonderfully realized narrative that’s consistently readable, intriguing and informative.  Winner of the 2018 Pulitzer Prize for History, it’s worthy of all the accolades.

I bought this book while perusing the shelves at Left Bank Books, my favorite independent bookstore in St Louis.   Check the store out when you’re in the area, maybe taking a break as you drift downstream towards the gulf.