Ground Beneath Us, The 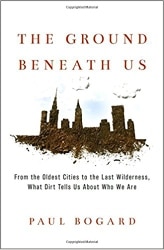 When’s the last time you walked barefoot anywhere?  Outdoors?  In some natural area?  The beach hardly counts.  If you’re like me, it’s probably hard to remember a time.

It’s this sad fact that served as one of the motivators for The Ground Beneath Us, writer Paul Bogard’s exploration of an often overlooked part of our planet.  He eloquently argues that by paving up and plowing under much of the Earth we’ve lost touch with the natural world.  Quite literally, we’ve lost the physical connection between our bare feet and the soil, a remarkable microcosm that we completely rely on.

A cornfield in Thailand.

Although most of us – those who aren’t farmers at least – might not think much about it, it’s obvious that the majority of what we eat grows in the ground.  Again it’s obvious, but most of the animals we eat also depend on food that’s grown in the ground.  Unfortunately, despite this fact, humans have destroyed a large percentage of the quality soil with which Mother Earth has blessed us.  Paving over it to create highways and parking lots or destroying it with chemicals and monoculture.

Bogard travels the world to make his case, from urban areas like Manhattan, Mexico City and London, to more natural settings like Alaska, the Sandhills of Nebraska and his home state of Minnesota.  He points out that the biodiversity of our soil is rapidly fading, which can lead to a decline in the nutritional value of the food that’s grown in it.  We can’t expect the plants that we all rely on to be healthy if the soil they depend on is not.  He goes on to cite soil scientists who fear that much of the world’s cropland may have only one hundred harvests before it’s terminally depleted.  It’s sobering stuff when you realize that we don’t have a way to create or replace the healthy soil that we’ve lost. 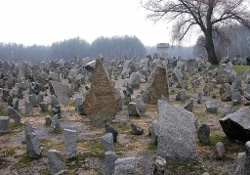 A memorial at Treblinka.

Setting soil biology aside for a bit, the author also points out that the ground isn’t only important as a place to grow our food; it can also hide critical moments in human history.  He reveals the ways that the dirt beneath our feet can still tell us much about ourselves, from the hallowed ground at Gettysburg to the mountains of the Sierra Nevada, where forensic soil scientists are still piecing together what happened to the Donner Party.  He even travels to Treblinka, where the Nazis plowed the ground to try and conceal evidence of their countless atrocities.

Assembling a truly frightening scenario, The Ground Beneath Us, successfully argues that humanity’s future may depend on the health of our soil more than any other single thing.  Although it receives scarcely any attention – compared to topics like water shortages, global warming or worldwide extinctions, soil scarcity is likely to be our most formidable future obstacle.  Hopefully, this book and the work of many anonymous soil scientists will help give this topic the attention it demands.  Highly recommended.