The tree of trees… 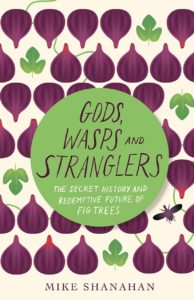 It may be the greatest story ever told.  If you’re really into the complexities of nature, there’s nothing better than the story of the fig.  From massive trees to diminutive epiphytes, the approximately 850 species in the genus Ficus cover much of the tropical world.  But the most fascinating part of the life history of the fig is the tiny fig wasp that it relies on for pollination.   Each fig has its own wasp and each wasp has its own fig, demonstrating one of the most amazing mutualisms in the biological world.  A fig tree fanatic of the highest order, journalist/ecologist Mike Shanahan explores one of the most important plants in the tropics in Gods, Wasps and Stranglers.

Shanahan starts out by describing the crucial role that fig trees play in tropical forests.  As a reliable source of delicious fruit – more accurately an infructescence known as a syconium – fig trees attract hundreds of different hungry creatures to feast on them.  These animals then attract predators, also hoping to find a meal.  In the process, each fig tree becomes a small ecosystem unto itself.  For many animals, from birds to monkeys to bats, the nutritious fig represents the difference between life and death. 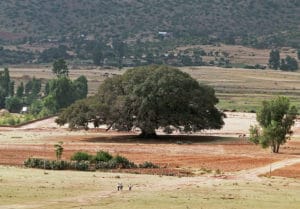 A massive sycomore fig in Ethiopia.

The author also details the bizarre world of the fig wasps that pollinate the trees.  A reproductive saga unlike any other, it takes place entirely within the small fruit of the fig tree.  It’s a story that emphasizes the importance of every denizen of the ecologic web, no matter how seemingly small or insignificant.  Moreover, there are other wasps that have evolved to parasitize the larva of the pollinator wasps, further adding layers of complexity to the story. 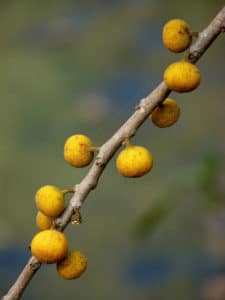 Shanahan also explores the prominent role that fig trees have played in human evolution and culture.  From a critical source of food for our early hominin ancestors to an object of worship, the fig tree has been a reliable ally of humanity over the millennia.

Lastly, and maybe most intriguingly, the author describes how fig trees may be nature’s most effective mechanism for habitat restoration.  From the rocky terrain of a newly erupted volcanic island to the wastelands that remain after humans clear cut a forest, figs manage to grow in some truly inhospitable environments.  In addition, they attract countless other animals – who bring with them many other types of plant seeds – which can rapidly lead to the creation of an entirely new tropical forest.

Featuring a cast of thousands, the story of the fig tree is a saga unlike any other.  God, Wasps and Stranglers successfully captures the awe inspiring reality of this unique life history quite effectively. Shanahan’s seemingly indefatigable passion for the topic rapidly proves infectious; it’s sure to create more budding fig fanatics like me.  Strongly recommended.