Gifts of the Crow

A murder of wits… 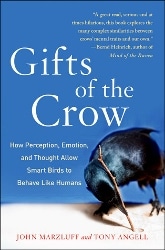 Can you tell how smart somebody is by looking at their brain? Probably not, as most human brains look pretty much alike.  But scientists have long figured that the intelligence of other animals was reliably determined by what their brains looked like.  Since humans are smart (at least some of the time), comparative neuroanatomists went with the general idea that the more closely an animal brain resembled a human brain the smarter the animal must be.  Not surprisingly, this approach gave mammals a significant edge in the brainpower competition, as mammalian brains tend to share some structural similarities that non-mammals lack.  For this reason, the intelligence of animals like birds, crocodiles and octopuses has often been dismissed on a purely anatomical basis. 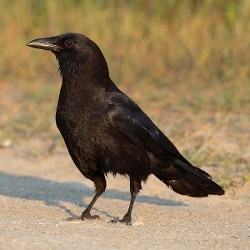 An American crow, looking for mischief.

Fortunately, there are other ways to deduce an animal’s intelligence and over the past few decades field biologists and animal behaviorists have been able to use observation and experimentation to reveal the clever ways that many previously overlooked animals interact with their world.  Intrigued by the intelligence of the ubiquitous American crow, University of Washington professor John Marzluff has been revealing the ingenious antics of these unapologetically bird-brained creatures for years, featuring them prominently in Gifts of the Crow.

It’s been more than 300 million years since the reptile-like common ancestor of crows and humans last crawled upon the Earth.  Since that time both lineages have had plenty of time to pursue an intelligent way of life entirely independently.  Not surprisingly, each animal’s neuroanatomy reflects these divergent pathways, but interestingly many of the resulting behaviors share much in common.  Marzluff, ably supported by nature illustrator Tony Angell, explores many of these examples of parallel evolution.  From communication and problem solving to inventive play and future planning, crows readily display human-like intelligence to anyone who’s willing to pay attention. 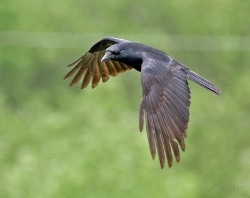 Marzluff provides many intriguing examples of corvid intelligence, but the most tantalizing and intriguing descriptions involve an ongoing experiment on the UW campus.  After upsetting select individuals in the local crow community while wearing distinctive caveman masks, researchers were repeatedly scolded by the upset crows whenever they ventured outside.  Not only did these crows consistently remember their offenders, they proceeded to pass the information on to other crows that weren’t present when the distressing acts took place.  Exhibiting memory – and grudge holding – skills that are truly remarkable, the crows continue to scold caveman mask wearing humans to this day, years after the experiment began.

Whether they’re windsurfing on pieces of bark, seeking revenge on human adversaries or comically pulling the tails of other befuddled creatures, crows and their raven and jay brethren are a source of constant entertainment for those who take the time to learn their intriguing ways.  Gifts of the Crow successfully captures much of the fascination and bemusement that comes to those who study these remarkable creatures.  Highly recommended for any readers interested in animal intelligence or bird behavior.

Check out some of my review of other books about animal intelligence:  Are We Smart Enough to Know How Smart Animals Are?   /   The Soul of an Octopus   /   How Animals Grieve