A Murder of Marples 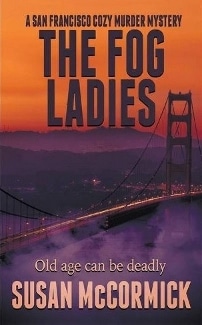 Let’s face it; ladies of a certain age have always been the best cozy mystery sleuths. Just ask Miss Marple or Jessica Fletcher. So what if we had a whole group of ladies (a gaggle of gumshoes? a bevy of bloodhounds?), living in the same apartment building, who solve mysteries together? Sounds pretty great, right? Well, yes and no.

The Fog Ladies, by Susan McCormick, is the first in a series of cozy mysteries set in San Francisco. The titular ladies are indeed all of a certain age, and most have lived in their rent controlled apartment building for many years. They are not, however, really the main characters. The primary amateur detective is Sarah James, an exhausted intern at a nearby hospital whose apartment is paid for by her residency program. The Fog Ladies are more the quirky neighbors than the sleuths.

Our story opens with the murder of one of the building’s tenants. We know it’s a murder, but the rest of the characters do not (this is already a problem – being a huge step ahead of characters we have yet to meet is a real pace killer). The older ladies in the building are abuzz with the sad news, though it seems that they all recognize that the deceased was a particularly unpleasant woman. She was not the first of their group to pass away, but her “accident” starts them wondering if the deaths have all been as natural as they seemed.

First the good stuff. McCormick does a nice job of setting up her elderly cast of characters as individuals with different levels of infirmity and very different personalities. Some you will adore, some you will tolerate, some you will probably loathe – but you will recognize someone you know in each and every one. She also does a very nice job establishing Sarah as a main protagonist by giving her a substantial subplot that helps us get to know her outside of the building. I also enjoyed the use of the San Francisco area as a backdrop. I don’t know a lot about the area, but enjoyed the added mystery that some fog and rain gives to any story.

The things I do not love may be due to the book being an obvious first in a series. The Fog Ladies feel sometimes like caricatures, brushed with broad strokes. Presumably we will get to know them better in future books and their stories will feel more developed. There were times when it felt like the negative aspects of each character were the only ones being explored because they are all suspects, which leaves the reader less than sympathetic for their return in future installments.

I have to admit that I’m disappointed that the starring role goes to the young doctor. I like her character, but would have loved to see the ladies pull together and solve the murder on their own, or with Sarah as an equal participant rather than the main player. And this is nitpicky, but I’m annoyed that McCormick choses to bounce back and forth with the names of the older women. Sometimes she uses first names, but often they are referred to as “Mrs. HusbandsName”. I assume it is done as a nod to the more formal times in which the ladies presumably grew up, but it ends up being confusing and feels patronizing.

Overall The Fog Ladies is a good way to while away some hours. It isn’t a stellar start to a series but there is definitely potential and ample room for the characters to grow and develop as more cases come their way.