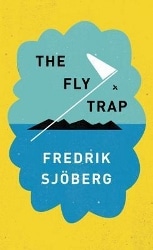 It’s a story of obsession.  An obsession with rather small things to be accurate.  But from small things truly entertaining books can arise.  Hidden away on a small island – about 15 square kilometers to be exact – entomologist and writer Fredrik Sjöberg spends his days wandering Runmarö in the Stockholm archipelago, searching for a particular kind of fly.  Reveling in isolation, rumination and buzzing things, The Fly Trap is an engaging look at one man’s very Swedish life.

They’re called hoverflies – scientifically known as the family Syrphidae – and there are about six thousand species described worldwide.  They’re pretty common around flowers and you’ve probably seen them without even knowing it.  Their most impressive trick is remarkably convincing bee and wasp mimicry.  Typically they are all decked out in yellow and black stripes and unless you know what to look for, you’re likely to mistake them for some sort of frightful stinging creature.  Despite their fearsome appearance, they’re entirely harmless and serve as essential pollinators in many environments. 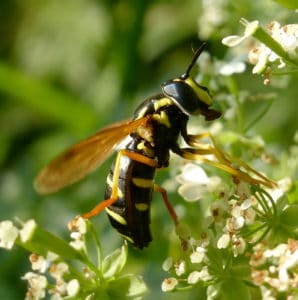 Devoting many years and considerable effort, Sjöberg has managed to find 202 different species of hoverfly on his island, more than anywhere else in Sweden.  Much of the book is devoted to exploring the thrill that comes with a knowledge of the tiniest details.  To know enough to be able to tell Chrysotoxum vernale from Chrysotoxum arcuatum – two virtually identical species of wasp mimics – provides a particular kind of satisfaction that permeates the book.  While the tiny differences between two flies may seem like the pinnacle of triviality, Sjöberg makes the whole thing fascinating, convincingly explaining how it gives his life meaning. 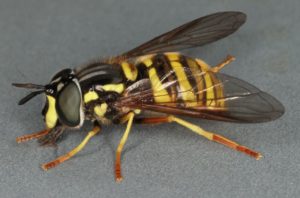 He also writes about Sweden and its proud history of excellence in the biological sciences.   Born in 1707, in a tiny village in southern Sweden – close to where the very first IKEA store would open in 1958 – Carl Linnaeus would become known as the “father of modern taxonomy” and is second only to Charles Darwin when it comes to stature in the biological sciences.   While the great botanist, zoologist and physician provides inspiration, Sjöberg focuses primarily on a Swede who isn’t quite so famous.  Born in 1892, René Malaise was an eccentric entomologist, explorer and art collector who systematically collected thousands of different species of insects over his long career.  The author explains how the man’s famous invention of the Malaise trap – a large white tent used to capture flying insects – continues to aid and inspire entomologists to this day.  Throughout the book, Sjöberg frequently returns to Malaise’s curious life story, trying to fill in the gaps and solve some of the mysteries that it presents.

Frequently waxing philosophical when he isn’t obsessing on hoverflies and weird entomologists, Sjöberg is clearly the thinking human’s entomologist.  He’s also a gifted writer, with an artful assist from translator Thomas Teal.  Both peculiar and compelling, The Fly Trap is sure to intrigue anyone with an interest in our six-legged friends.  Or any reader who’s looking for a unique perspective on life.

Check out some of Dave’s reviews of other books about insects and the people who love them:  A Sting in the Tale   /   Honeybee Democracy  /   The Sting of the Wild