Because that’s where the feathers are… 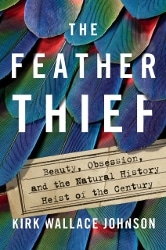 Usually a compelling true crime story involves some heinous act, like a murder, a kidnapping or a bank robbery.    Feather thievery wouldn’t be expected to make the grade.  But that’s only because the average reader doesn’t understand what names like Pyroderus scutatus and Cotinga cayana mean to a certain type of person.  If fly tying is your thing, these names represent the pinnacle of feathered beauty, serving as the raw materials for the meticulous construction of the most spectacular fishing flies.  Moreover, these birds are so hard to come by – and so astoundingly valuable – that one lacking scruples might decide to commit a crime just to get his hands on some.  In The Feather Thief, refugee advocate Kirk Wallace Johnson tells the completely true story of one such odd crime and the

equally odd criminal who committed it. 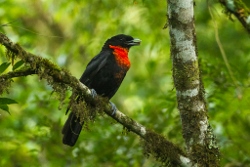 A home-schooled twenty-year-old from the small town of Claverack, New York, Edwin Rist doesn’t seem to be the likeliest candidate for a heist of international significance.  While he’s an accomplished flautist who aspires to make that his day job, his greatest obsession is tying flies, often spending ten hours constructing just one of the tiny lures.  Intrigued from a young age, he has gone on to achieve great acclaim as “the future of fly-tying” in the strange isolated world of fly tying fanatics. 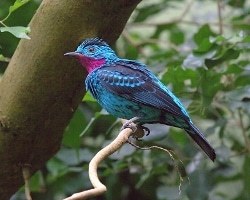 The spangled cotinga (Cotinga cayana) in all his glory.

Now, as anyone who’s paying attention knows, fly fishermen use artificial flies to catch fish, maybe a trout or a salmon.  Theoretically, the more realistic the fly the greater the success of the fisherman.  But that’s quite possibly the weirdest thing about this whole story.  Rist and his fellow tying fanatics don’t know the first thing about fishing; they’re simply in it for the flies.  And in order to tie flies, you need feathers, the fancier the better.

Not to dwell on the obvious, but the only place to get feathers is from birds.  And the birds with the very best feathers are flitting around tropical forests in places like Brazil or New Guinea, fully protected by international trade regulations.

So what’s a young fly-tying fanatic to do?  Especially if he’s all out of feathers and stuck playing flute at the Royal Academy of Music in London.  It was this dilemma that prompted Rist to sneak off on his own one summer night in 2009, break into the British Museum of Natural History in Tring and stuff his suitcase with hundreds of exotic bird skins.

It’s a thoroughly riveting story, and Johnson maneuvers through its many convolutions with skill, incorporating all sorts of interesting side stories.  From Alfred Russel Wallace – the father of biogeography – to the history of fly tying, there’s plenty here for natural history buffs to enjoy.  But it’s also an entertaining true crime narrative, as the author tries to peel away the mysteries that persist.  His own gradually expanding obsession with the unanswered questions makes for some fun reading.

It’s not your everyday true crime narrative, but The Feather Thief is definitely an interesting story, well told.  You don’t have to be a fly fisherman, a fly tier or a feather fetishist to enjoy Johnson’s account of one of the weirder crimes of the century.  Four luminously vibrant stars.

Check out my reviews of other books about feathers and fancy birds:  Feathers   /   Birds of Paradise