Everyone Brave is Forgiven

Just when you think you’re finished with WWII fiction 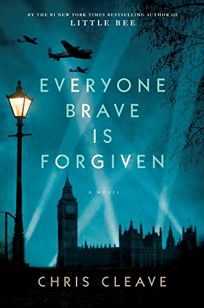 “Keep calm and carry on.” We’re all familiar with this phrase, coined in 1939 by the British government to fortify the morale of a nation faced with impending bombing raids. (As an aside, although the slogan was printed on 2.45 million posters, most of them were never displayed during WWII, ultimately being pulped to save paper.)

As I consumed Everyone Brave is Forgiven, Chris Cleave’s newest novel, I was reminded over and over of that motto—“Keep calm and carry on”—because it’s exactly what his characters do. These women and men—flawed, funny, hungry, lonely and emboldened—are required to figure out a way to survive: Mary, Tom and Hilda in Blitzed-out London; Alistair in France and, later, under a devastating siege on the island of Malta.

Cleave’s own grandparents served as the inspiration for Mary and Alistair. Their journeys through the war—both physical and emotional—will have your jaw falling to the floor. They are called upon a million times to be brave in the face of terror, so they turn to the little things to keep their lives glued together in one tenuous piece. Humor, friendship, sex, gin fizzes, the art of letter writing, a jar of blackberry jam, cup after cup of black tea the color of straw: these are the saving graces that come to give their days structure and meaning.

I have read many novels about WWII, but since Anthony Doerr’s astonishing All the Light We Cannot See I had declared a WWII-novel moratorium for myself. “After all,” I blithely said, “what else is there to say about the war? Haven’t I already read it all?” Ah, the ignorance! Everyone Brave is Forgiven is a fresh take on a subject that’s been around a long while. And it’s not just Cleave’s characters that light up the story: it’s his words and language. To me, the sign of a well-written book is my dog-earing of pages (a bad habit, I admit, when the book is borrowed from the library): when I’m done, I want to go back and revisit the way an author’s language sings. Upon finishing Everyone Brave is Forgiven, I was surprised to see that I had dog-eared nearly 40 pages. Clear proof—to me, anyway—that Cleave gives precise and tender attention to how his sentences flow. They are ravishing:

“What he had not understood, before battle, was that time could become a ribbon to be looped and pinned back to its center, the petals of a black rosette.”

“Mary slipped along with the carefree, long-limbed swing of someone on whom the present hour was neither too tight nor too loose.”

“This was how a kind heart broke, after all: inward, making no shrapnel.”

These sentences carry the reader back and forth from battlefield to home-front, keeping the plot moving along as swiftly as the Germans’ relentless advance. Yet, chapter after chapter, the book is one to savor. I certainly took my time with it.

There are quite a few love stories contained within the covers of Everyone Brave is Forgiven—romantic love, love for a friend, love for a child, love for one’s ideals—but the book never smacks of sentimentality. Instead, it is smart and challenging, turning some of these loves on their heads while offering different possibilities for human connection.

Everyone Brave is Forgiven taught me many things I didn’t know—another sign of an unforgettable and intelligent book. For instance, I had no idea that “undesirable” children were left behind in London while the rest were ferried off to the safety of the countryside. I didn’t understand the full extent of the racism facing black people in England during WWII. And Malta? Where is Malta? I feel edified.

Above all, there are no heroes in Everyone Brave is Forgiven, just entirely relatable people who try to make the right choices, sometimes succeeding but often stumbling. Regardless of their triumphs or missteps, their British resolve is remarkable.

Keep calm, Chris Cleave, and carry on with your magnificent writing. I want more.