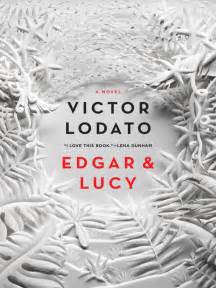 Not since reading John Irving’s A Prayer for Owen Meany have I been so enamored of a boy in a novel.

If you’ve read A Prayer for Owen Meany (and I certainly hope you have), you’ll recall that 11-year-old Owen is tiny in size but SPEAKS ONLY IN CAPITAL LETTERS. He has a peculiar voice that never deepens, and he trusts in a divine presence that isn’t apparent to anyone else. A bright and fully-realized character in every way, Owen is my standard by which all other fictional children are judged. (Unfair, but true.)

In Edgar & Lucy, playwright, poet and novelist Victor Lodato gives us Edgar Allan Fini, and I find myself murmuring words of gratitude for this tragic, unconventional eight-year-old. Reminiscent of Owen, Edgar is opinionated, clever and attuned to the otherworldly. He also has the same ability to cause me tangible distress over the state of his well-being.

Edgar is albino, described by his doting grandmother as “a little white cloud… a ghost.” He likes to hide in his closet, make strange gestures with his hands, and imitate the noises of small animals. Named—fittingly—after Poe, Edgar has already encountered more than his share of darkness and misfortune, but he carries on with a rare sensibility, his thoughts “little blue wheels rolling over sunny pastures.”

Edgar lives in suburban New Jersey with two women stubbornly at odds with each other: Florence, his grandmother, who makes meatballs and prays to the Virgin Mary; and Lucy, his promiscuous, sharp-tongued mother. Over the course of Edgar & Lucy, the bonds linking these characters—and Edgar’s late father, Frank, whose devastating story lies at the heart of the novel—are tested, broken, and exquisitely re-formed: “Love was so exhausting, the way it spun you around.”

Lodato’s epic novel offers an unflinching look at the things that have the power to take us: mental illness, death, even other people. The subject matter is significant, but Lodato weaves in humor and plenty of witty conversation to counteract the heaviness. He succeeds in crafting a insightful, meaty book that is delightful to read. It is so full—of Edgar and food and dogs and art and tunnels and nature and eccentric neighbors—that one could crack it open it open a second and third time and still stumble upon something new. While I appreciate this abundance, the novel does start to feel rather stretched-out toward the end—although Lodato manages to wrap up the story beautifully.

My main complaint with Edgar & Lucy is the narration. It alternates between characters and tense, which generally doesn’t bother me when I’m reading, but Lodato jumps around even within the same chapter. This switching-up provides a depth and breadth of perspective, but it also creates a sense of confusion that occasionally detracts from the flow and momentum of the story.

Overall, Lodato’s writing is stunning. In gorgeous prose, he presents a gold mine of imagery and ideas that stick with the reader long after the last page. “He was bound to the world by a chain of wonder, each link an unanswered question… Always one had to ask: what happens next?”