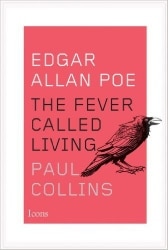 Featuring the most famous bird in American literature, Edgar Allan Poe’s The Raven has even served as the inspiration for a National Football League franchise.  Published in 1845, the poem received instant widespread acclaim and propelled its author to fame, if not fortune.  Although he continuously struggled to achieve financial success as a writer, Poe would go on to become one of the most influential authors in American history.  Widely acknowledged as the founder of the detective fiction and science fiction genres, he was also one of the earliest American writers to focus his efforts on the macabre.  Unfortunately, the author’s life was almost as distressing as his fiction.  History writer Paul Collins tells the story of this unique American literary icon in Edgar Allan Poe: The Fever Called Living.

Collins starts with a brief encapsulation of Poe’s tumultuous childhood, including his increasingly rocky relationship with his foster father, John Allan. Lacking any sort of stable love and support from an early age, it’s no surprise that he would struggle so much as a grown man. 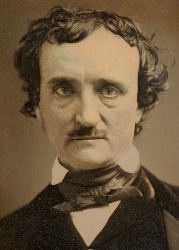 Quite possibly, the greatest American author photo of all time.

But Collins focuses most of the narrative on Poe’s constant efforts to succeed as a writer. One of the first American authors to try and make a living as his craft, Poe’s frequent displays of literary genius did manage to earn him some fame, but he quickly learned that even critically acclaimed poetry seldom pays the bills.  Although, his frequent alcoholic binges and dreadful decision making – like marriage to his 13 year-old cousin – may have had something to do with why he found success so elusive.  The man worked like a fiend but always found some way to sabotage himself.  Despite the frequently depressing topic, Collins’ storytelling does the groundbreaking author justice, making the man’s saga more compelling than pitiful.

A remarkable feat of biographical concision, Edgar Allan Poe: The Fever Called Living is a well-crafted account of the life of the man known as “America’s Shakespeare”.  I can recommend it enthusiastically for anyone who wants to learn more about this unusual and innovative author.