Digging in the dirt… 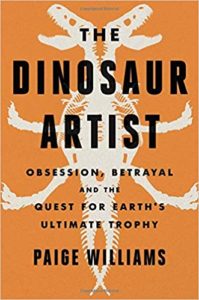 There’s definitely a heroic quality to whole thing.  Like Indiana Jones or his real-life equivalent Roy Chapman Andrews.  Scouring the globe, searching for dinosaurs and excavating their fossilized bones.  Then bringing the monstrous creatures back to life by reassembling them for display in famous museums, thrilling the throngs of visitors.  There are thousands of individuals who’ve caught the fossil fever, amateur scientists devoting much of their life searching for the next big discovery.  Floridian Eric Prokopi is one of those people and journalist Paige Williams tells his uniquely intriguing story in The Dinosaur Artist. It’s a curious case of an innocent hobby gone terribly, terribly wrong. 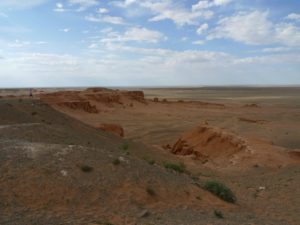 If you know where to look, there are fossils almost anywhere on the planet, but there are only a handful of places where the truly amazing pieces are unearthed.  Massive charismatic beasts like Tyrannosaurus rex or Brontosaurus.  Not surprisingly, the competition for these kinds of finds is ferocious and oftentimes there’s a lot of money to be made.  And that’s how Mr. Prokopi ended up wandering the red deserts of Mongolia, trying to get his hands on a Tarbosaurus – an Asian version of T. rex – hoping to support his family and feed his fossil habit by selling it to the highest bidder.

A Tarbosaurus skeleton reassembled in Barcelona.

Unfortunately, whether Prokopi knew it or not, removing large valuable fossils from Mongolia and shipping them half way around the world is illegal.   Furthermore, there’s only one place in the world where Tarbosaurus bones have been found – that’s right, Mongolia.  So if you’re auctioning off a 36-foot long fossilized Tarbosaurus skeleton in New York City and the right people hear about it, you’re likely to get into some hot water – as our protagonist learned the hard way.

Displaying a fine nose for the crucial details and an entertaining flare for storytelling, Williams weaves together numerous intertwining threads to chronicle the rise and fall of this talented individual.  It’s a consistently engaging and in-depth look at the dark side of fossil hunting, combining equal parts riveting international true-crime story and intriguing exploration of the world of fossils.  It’s also an illuminating look at the story of modern Mongolia, which might actually be the single bright spot in the entire sordid tale.

It’s hard to not feel a little sorry for the guy, he went from selling a few shark teeth out of his garage to smuggling contraband on the international market.  The reliable duo of greed and hubris blinded him to the fact that the water was getting too deep too fast.   It’s a fresh new take on a story that has been told many times.  While the fossils form the foundation of the narrative, the underlying lesson of The Dinosaur Artist is as old as the dinosaurs themselves.   What’s in Mongolia, stays in Mongolia.

Check out Dave’s review of a similar tale of innocent hobby turned criminal obsession:  The Feather Thief.   He’s also reviewed a handful of other books about dinosaurs and fossils:  The Rise and Fall of the Dinosaurs   /   Boneheads   /   The Tyrannosaur Chronicles.