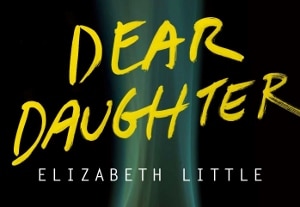 Being a teenager is a bitch. We all know it, but most of us try to forget it as we grow up and move on from all those angsty raging hormones and certainty that our lives are being ruined – RUINED – by one or both of our parents. Unfortunately for some fictional characters, moving on is tough because you get convicted of murdering your mother at the age of 16. I told you being a teenager is a bitch.

Elizabeth Little’s first novel (she is the author of two non-fiction books), Dear Daughter is all about Jane Jenkins. Or, as the press has dubbed her in the ten years since the death of her mother, Janie Jenkins. She hates that particular diminutive. She hates a lot of things. She isn’t a nice person. She grew up rich and spoiled and angry, with a weirdly strict and distant mother and no father. She made herself tabloid famous in the vein of other spoiled, angry children of wealthy parents and when her mother was found dead on the floor with Jane at her side covered with blood, she was convicted in the court of public opinion within minutes. It didn’t take much longer for the actual court to follow suit.

Now it is ten years later. Jane spent a lot of time getting in trouble in prison (to no one’s surprise) but is now unexpectedly being released on a technicality. The press is going wild with speculation about what she will do with this undeserved judicial reprieve and rabidly look forward to the day of her release. Jane, however, has plans of her own. She wants to find out what really happened the night of her mother’s murder. She doesn’t remember any of it. During her decade of incarceration she’s managed to piece together a few scant clues and now she’s dead set on uncovering the truth.

Weirdly enough, Dear Daughter is almost a cozy mystery. Jane ends up in a small town with a lot of hush-hush history and quirky characters that either love or hate Incognito Jane (she can’t be there as herself – the press is hot on her trail) and help or hinder her search for information about her mother. There’s enough eccentricity to break up what could have been a story filled only with vengeance and pathos, and the story is told in the first person by Jane – not a shrinking violet by any means. She has a foul mouth, a bad attitude and is really struggling with being a decent person. She can’t be herself, so she has to at least try.

I ended up enjoying Jane and her hunt for her past. She has a lot of flaws – so many flaws – but it doesn’t escape the reader that she was little more than a child when she was incarcerated and has essentially gained no real life experience that would help her grow up in the time since. She’s a little bit funny, a little bit infuriating and a lot lost in a world that wants nothing more than to throw her back into a cell – a place where she doesn’t even know if she belongs.

Overall, kudos to Little in a terrific first novel. It isn’t going to be everyone’s cup of tea – Jane can be abrasive and obnoxious – but I enjoyed both the character and her story.