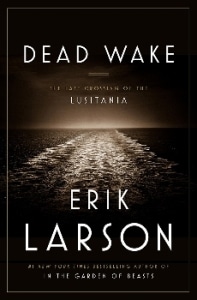 We have a lot different words for it – luck, chance, fate or fluke to name a few – but they don’t really succeed in capturing the persistent astonishment we so often experience when we realize how momentous events can turn on the most trivial of details. “If only…” is the phrase we often tack on the beginning of such observations, unwilling to recognize that everything that ever happens is composed of trivial details if you look at it closely enough. So it was with the great British ocean liner RMS Lusitania. As famous for its luxurious accommodations as it was for its world class speed, it crossed the Atlantic Ocean 202 times during its service from 1906 until its fateful meeting with the German submarine U-20 off the southern coast of Ireland on May 7th, 1915. In Dead Wake, best-selling history writer Erik Larson tells the riveting story of the ship’s final crossing and the role it played as a turning point in history. 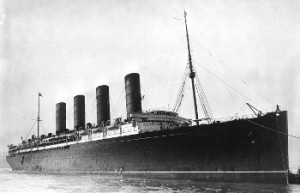 As he has done so often in his other acclaimed books, like The Devil in the White City and In the Garden of Beasts, Larson excels at corralling countless details as he narrates the Lusitania’s final seven days on the open ocean. From the finer points of luxury ocean liner travel to the dark and eerie existence aboard a German U-boat, he deftly brings to life images that take the reader back 100 years in time. He also weaves recent widower and US President Woodrow Wilson and First Lord of the Admiralty Winston Churchill into the story, revealing many particulars that make the story much more than a dry history book. 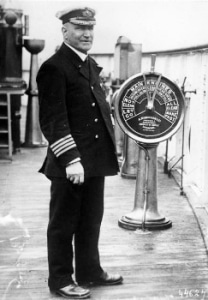 Captain Turner at the helm.

One of the major difficulties in history writing, particularly when the story ends in disaster, is that everybody knows the ending. Nonetheless, by bringing in dozens of interesting characters, both ordinary folk and exceptional individuals, Larson manages to create plenty of dramatic tension and an entirely riveting account of the final tragedy. He presents the story from numerous perspectives, generating a particularly vivid and sympathetic picture of the ship’s captain, Commander William Thomas Turner. At the same time, he dispels some of the myths that surround the sinking of the ship and its impact on the World War I.

It was 18 minutes that changed history, resulting in 1198 dead crew and civilians. But the sinking of the Lusitania that you learned about in high school history probably wasn’t the entire story. A thoroughly compelling and wide ranging chronicle by one of the great practitioners of modern narrative history writing, Dead Wake is another successful outing by Erik Larson. Highly recommended for history buffs, fans of top notch storytelling or anyone who likes to ponder the fateful moments of times gone by.

Check out our reviews of other WWI books:  To End All Wars   /   All Quiet on the Western Front