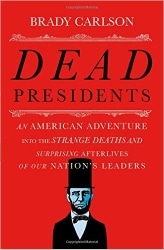 It’s happened exactly 38 times. As of this writing (April 2016), 38 current or former US presidents have gone to meet their maker.  Understandably, it tends to be pretty big deal when it happens.  It was a big deal when George Washington did it in 1799.  It was a big deal when Gerald Ford did it in 2006.   It will be a big deal when it happens a 39th time.  For reasons that aren’t entirely clear, radio journalist Brady Carlson has an unusual fascination with the subject and decided to visit each of the 38 presidential gravesites, often bringing along his family.  The result is the aptly titled Dead Presidents and it’s a thoroughly entertaining view of American history from six feet under.

As everyone knows, some presidents are more beloved than others. It’s also a given that there are quite a few that almost no one is be able to remember.  But even if you can’t recall one single piece of Millard Fillmore trivia, you can be sure that there’s someone somewhere who works to keep the legacy of even the most undistinguished and thoroughly forgotten dead presidents alive.  Carlson travels the country seeking these people and places out, exploring the memorials, museums, libraries and cemeteries that pay tribute to each man’s service. 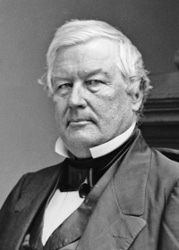 You might think it’s not possible to make a book about 38 dead white guys entertaining, but Carlson definitely has a knack for it. Whether he’s describing why it took most of nine decades to build the Washington Monument or why native Hawaiians have a special place in their heart for Grover Cleveland, the author’s wide-ranging narrative is consistently engaging.  His tangential wanderings through both time and space keep things interesting, making sure to give each man his due – even James Polk and the two Harrisons. 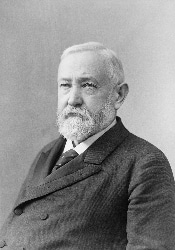 Carlson also reflects on how the entire process of presidential death has changed with the times. Earlier presidents died not knowing if history would view them worthy of memorialization – often explicitly asking their survivors to avoid making a big deal about it – but nowadays presidents have their afterlives intricately planned, making sure that their unique brand lives on in perpetuity.  After more than two centuries of presidents, there’s no denying that marketing is the American way.

While I can’t tell how difficult it was for him, Carlson is particularly gentle on the deceased, rarely bringing up some of the more vile things our leaders have chosen to do while in office. Instead, he goes out of his way to bring out the human side of the men that we usually read about in dry history books.  Part of a new fun history genre, his writing reminds me of the works of Sarah Vowell, displaying a similar knack for historical oddities and the peculiar nooks and crannies that many historians seem to overlook.

Full of interesting history, but never taking itself too seriously, Dead Presidents is a consistently humorous, often bizarre and occasionally morbid look at how America has immortalized its leaders over the centuries.  All 38 of them; the good, the bad and the forgotten.  Recommended for anyone who enjoys an unconventional approach to history or who’s wondered why no one ever has anything nice to say about Franklin Pierce.