Dark Matter and the Dinosaurs 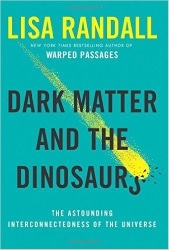 I thought that physicists had given up. In the 1980s and 1990s, when they decided that the universe was mostly made of dark matter and dark energy – two substances that are basically undetectable – I figured that they had finally thrown in the towel. Invoking such seemingly magical substances to explain the world around us seemed like a step all the way back to the Dark Ages (pun intended).  Did they really know what they were doing, or had decades of quantum wackiness finally driven them off the deep end?  Thanks to Lisa Randall, a particle physicist at Harvard University, my nerd angst has been assuaged.  In Dark Matter and the Dinosaurs, she makes some sense of this modern view of the world, even if it remains stranger than anyone could ever have imagined.

Unfortunately, while dark matter is the consensus explanation for the “missing” mass that makes galaxies spin faster than they should, the nature of this substance hasn’t become much clearer over recent decades. Randall presents plenty of solid evidence to prove that it exists, but admits that an understanding of what it actually is remains a significant challenge.  Although mysteries remain, she does present a coherent perspective that at least makes the whole idea less magical. 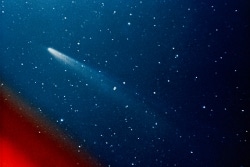 The comet of death?

Even though it may be a while until we know more details, maybe we can at least determine where dark matter resides. Much of Randall’s work focuses on determining the density of dark matter in our Milky Way galaxy.  Originally thought to form a large spherical cloud surrounding the galaxy’s center, dark matter may actually be partially compressed into a disc shape that may influence the Solar System, out here in the galactic suburbs.  Intrigued by an idea from one of her physicist colleagues, Randall came to realize that dark matter may even have affected life on Earth.

Maybe, she postulates, when the Solar System periodically passes through a dense region of dark matter it jostles the icy inhabitants of the distant Oort cloud, sending a shower of comets toward the Sun and putting the helpless Earth in harm’s way. Maybe that’s what happened 66 million years ago when a comet slammed into the Yucatan peninsula, setting off the most famous extinction event in Earth’s 4 billion year history.

With all these maybes, it’s going to take a lot more than a discussion of dark matter to put this whole story together. Bravely, if not wisely, Randall goes on to a wide-ranging exploration of some of the minor constituents of Solar System – meteoroids, asteroids, comets – and then reviews how these players have occasional tried to destroy the earth, causing massive extinctions.

Disappointingly, while the notion that dark matter killed the dinosaurs may be aptly described as the pinnacle of intriguing, I struggled with Randall’s presentation. This mother of all thought experiments has so little actual evidence to support it that my patience wore thin after a while.  While the book is loaded with compelling concepts and ideas, the big picture that the author presents is such a tenuous house of cards that it seems more like science fiction than reality.  Maybe Randall’s intellectually courageous speculations will prove to be spot on some day, but much of the data she’s relying on to put this all together hasn’t been collected yet.

In my science reading, I haven’t come across many books devoted to dark matter. Presumably, that’s because we know so little about it. The ingenious idea to link this enigmatic substance with everyone’s favorite prehistoric monsters is certainly a publisher’s dream, and as a means to shed some light on dark matter, Randall’s book is a partial success.  But taken as a whole, Dark Matter and the Dinosaurs is a disappointment for this reader.