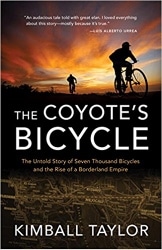 Mysteries on two wheels.  They were turning up all over in southern California just across the border from Tijuana.  Bicycles of every kind – road bikes, mountain bikes, beach cruisers and more.  Mixed in with all the other detritus that frequently accumulates when the Tijuana River overflows its banks, no one thought much of them initially.  But as the number of bikes grew into the hundreds and thousands, San Diego based journalist Kimball Taylor – a bike enthusiast in his spare time – realized that something was up.  The Coyote’s Bicycle is his thoroughly engaging account of his pursuit of this remarkable, real life mystery on the borderland. 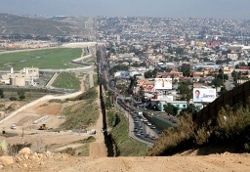 The US-Mexico border: Tijuana on the right, San Diego on the left.

As he pieces together the puzzle of the abandoned bikes, Taylor compellingly tells the story like a true crime narrative, tracing its earliest origins into the state of Oaxaca in southern Mexico and gradually unwinding a thoroughly convoluted and concealed tale.  Replete with heroes, villains and the omnipresent US Border Patrol, the saga builds into a riveting and suspense filled drama.   It also presents an in-depth exploration of US and Mexican border policy, revealing how illegal border crossings and the efforts to control them have created an entire industry in American southwest.

Throughout the book, Taylor’s unwavering enthusiasm for the beauty and efficiency of the bicycle is frequently on display.  The story might never have been told without this motivating passion.  You don’t have to be a bike nut to find the book captivating, but it definitely doesn’t hurt.

A mesmerizing tale, full of engaging personalities and some entirely righteous storytelling, The Coyote’s Bicycle is an impressive – and often dangerous – feat of investigative journalism.  It also successfully illuminates some of the dark underworld of immigration and human trafficking.  Highly recommended for anyone who enjoys gripping true crime sagas.

Check out Dave’s reviews of other books about bicycles and society:  Road to Valor   /  The Cyclist Who Went Out in the Cold