Essays are for cowards… 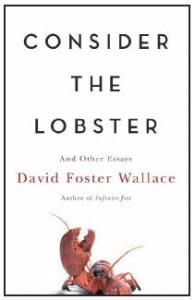 I’ll never read Infinite Jest. Although I consider myself a David Foster Wallace fan, I am certain that I’ll never be brave enough to crack open his magnum opus. The novel – published in 1996 and clocking in at a hefty 1100 pages – has achieved the distinction of being both despised by some and anointed as one of the greatest works of the 20th century by others. But despite my literary cowardice I’m still intrigued by the late author’s creative approach to the written word. Thankfully, the man left behind more than just 15 pound novels. Consider the Lobster is a collection of ten essays he published in 2005 that displays his unique genius – for both better and worse.

Published previously between 1994 and 2005 in various periodicals, the essays span a wide array of topics and consistently display DFW’s inimitable, heavily footnoted style. Highlights include a ruthless review of tennis phenom Tracy Austin’s autobiography, a lengthy award-winning account of his time on the campaign bus during John McCain’s 2000 bid for the Republican presidential nomination and quite possibly the best (and longest) review of a dictionary ever to appear in the English language. The author’s ability to make the tangential fascinating never ceases to amaze. 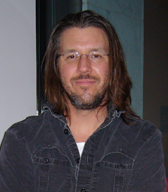 Other essays that are well worth reading include his account of September 11, 2001 as experienced in his hometown of Bloomington, Illinois, a sympathetic exploration of the life of the lobster, an outrageously complicated investigation of the bizarre world of conservative talk radio and a man-on-the-street account of the 1997 Adult Video News Awards presentation in Las Vegas.

Unfortunately, I found his reviews and commentary on Updike, Kafka and Dostoevsky tougher going, which is probably more a reflection on my insufficient knowledge of the details of these men’s works than it is on DFW’s writing. It’s often hard to keep up with the man even on the most familiar topics.

While many of these essays can be found elsewhere, Consider the Lobster, brings some of David Foster Wallace’s finer works together in one place. Some of the topics are no longer timely, but the author’s unique style and craftsmanship is still a thing to behold. Most of these works are sure to please DFW fans, even those who are too timid to read his novels. Additionally, this collection is an excellent place to start if you’re new to the man’s linguistic artistry.

Another review of DFW’s (short) work:   A Supposedly Fun Thing That I’ll Never Do Again