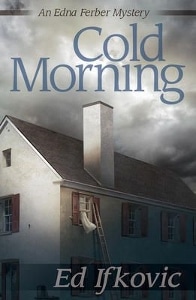 Do you know who Edna Ferber was?  I mean, beyond recognizing her name?  Then you’re one step ahead of where I was when I opened the book Cold Morning and discovered that she is the main character in author Ed Ifkovic’s mystery series.  This happens to be the sixth book in the series which, combined with having to look up exactly who the woman was, made for some…interesting reading.

Cold Morning has our main character, the fictionalized Edna Ferber, camped out (figuratively, of course, she’s actually in a fine hotel) in the small New Jersey town of Flemington.  She and hundreds of other journalists and onlookers are there to attend the trial of Bruno Richard Hauptmann, who has been accused of kidnapping and killing the child of aviator Charles Lindbergh.  Edna is to be writing human interest stories for the New York Times.

The trial is just beginning as we enter the story and Edna is spending time with her friend and fellow Times writer Alexander Woollcott.  They banter and squabble and observe the circus of a trial that is emerging from the publicity surrounding the case.  Edna is disgusted, Woollcott is enchanted.

As Edna is in the habit of taking a daily early morning walk (the cold mornings of the title) she happens to see and hear things that others do not.  Some of those things involve a waitress at the hotel restaurant who turns up dead not long after Edna hears her arguing with a suitor.  Edna digs into that case as the trial swirls around her.

First I want to say that I enjoy historical fiction.  However, I’m not a fan of using a real person as the main character.  There is too much known about Edna Ferber (yeah, I looked it all up) for me to really invest in her as a fictional heroine.  I prefer the people who existed in real life to make cameo appearances.  I also don’t care for this character in general.  To be honest, she’s a snobby bitch.  Maybe she was actually precisely that, but who cares?  I don’t want to read a book where the main character is someone with whom I cannot sympathize, find pompous and overbearing, and would love to see be wrong just because she is so distasteful.  As a reader, it would be nice if I could root for the protagonist.  Sadly, that is not the case here.

I do admire Ifkovic’s commentary on the Hauptmann trial throughout the book.  He’s done his homework and obviously has a point to make and is quite successful.  He certainly convinced me to learn more about the case and the trial, and if that’s all he accomplished he’s done a good thing.  History does tend to be forgotten, after all, and thus repeated.  He also does a very nice job with the period setting.

Unfortunately, my dislike of the Edna Ferber character was too much for the book to overcome.  Because of her nature, the entire book felt overwritten and haughty.  The main mystery of the dead waitress was nowhere near interesting enough to compete with the Hauptman trial or the overbearing main character and wound up simply being lost.

Overall, I didn’t care for Cold Morning.  It isn’t badly written; I simply loathed the character of Edna Ferber.  Perhaps she was loathsome in life – but it doesn’t matter.  I was unable to enjoy the book because she was maddening and vile.  Those of you who are Ferber aficionados may have a better time with her – or worse, depending on how accurate Ifkovic is in presenting her basic nature.  For me, Cold Morning gets 2 stars for its ability to bring to life the Hauptmann trial these many years after the fact, but I don’t recommend it as a mystery.