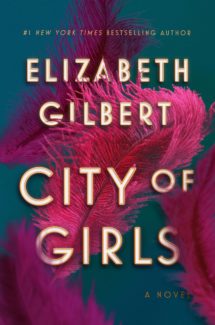 “There is no point in denying yourself pleasure, or in being anything other than what you are.”

Elizabeth Gilbert has compared her new book, City of Girls, to a champagne cocktail. In her press materials, she describes it as “light and bright, crisp and fun.”

On the cusp of twenty, Vivian Morris is the beating heart of City of Girls. She’s a Vassar College dropout from upstate New York whose weary parents have sent her to live with her aunt in Manhattan. Rather than take offense to being cast out, Vivian is keen for her new adventure. “I knew I was being banished, but still… in style!” she says, jubilantly. “New York City in 1940!” The reader can practically see the stars shimmering in her elaborately mascara-ed eyes.

Aunt Peg owns the shabby Lily Playhouse in Midtown, with which Vivian falls head-over-heels in love. She becomes enamored of the whole theater scene and dives straight into its attending social life. Her budding independence is a cake frosted with lipstick, low-cut dresses, late nights, booze and men. The Lily showgirls take Vivian under their coiffed wings and, in moments that are both raucous and tender, help her bid farewell to every scrap of innocence.

Vivian tells her coming-of-age tale in a voice that is at once inimitable. She starts off jaunty and exuberant, dishing up observations and one-liners that will have every reader choking with laughter. But as Vivian’s dazzling New York City of 1940 inexorably shifts into something far less glamorous, both she and her storytelling sober up. “Resist change at your own peril,” Aunt Peg entreats her. Vivian takes this advice to heart, reinventing herself to survive the times—and, of course, war.

Vivian’s hard-won wisdom and dignity carry us through the last third of the novel, which couldn’t be more different than the first two thirds. At last, Gilbert delivers the quintessential heartache and grit for which she is known. The same girl who once misbehaved at nightclubs has grown into a woman who reflects, “I felt mercy for everyone who has ever gotten involved in an impossibly messy story. All those predicaments that we humans find ourselves in—predicaments that we never see coming, do not know how to handle, and then cannot fix.” Vivian’s compassion is one of the book’s greatest gifts, and it lingers long after the last page.

The narrative style of City of Girls is notable, if at first confusing. An elderly Vivian begins the book by explaining that it’s April 2010 and she has just received a letter from Angela. She doesn’t explain who Angela is, only that she’s “his daughter.” We don’t know who “he” is, either, so our curiosity is stoked. Angela has written, “Given that my mother has passed away, I wonder if you might now feel comfortable telling me what you were to my father?” In reply, Vivian says she can only tell Angela “what he was to me.” Thus, the story unfolds as Vivian’s sweeping, generous response to Angela’s question.

“I’d never been more desperate to know how a story ended,” a young Vivian confesses after eavesdropping on some gossipy showgirls.

I felt the same way, Vivian, about your own.