The Last of Twelve? 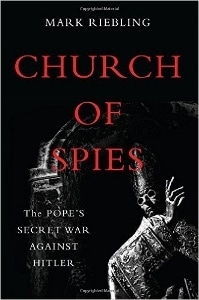 Why was he silent?  Often referred to as “Hitler’s Pope,” Pius XII has frequently been the subject of criticism for his failure to publicly denounce Adolf Hitler and the Nazi Party during World War II despite having full knowledge of the many atrocities committed by the Fuhrer and his followers.  The pope’s decision to maintain a strict public position of neutrality has often been viewed as just one more piece of evidence demonstrating the moral decline of the Catholic Church during the 20th century.  But maybe there’s more to the story. Relying on recently unearthed documents, historian Mark Riebling reveals how the Vatican was anything but idle during World War II. Unfortunately, Church of Spies isn’t much more successful than those brave souls who repeatedly tried to eliminate the most infamous man in German history.

Long before his election to the papacy in 1939, Cardinal Eugenio Pacelli had generated conflict with the increasingly powerful Nazi Party in Germany, although as Secretary of State for the Vatican he had been instrumental in agreements that tried to temper Hitler’s opposition to the Catholic faith. While he publicly promoted peace in Europe prior to the onset of war, by the time Germany invaded Poland, Pius was enough of a realist to recognize that Hitler was a monstrous threat to the civilized world. 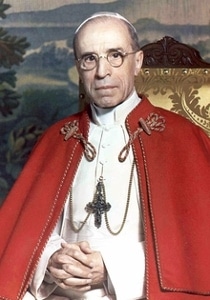 Without much support, Hitler’s opponents in predominantly Catholic Munich cautiously turned to the church in their efforts to oppose the Nazi Party’s transformation of the country.  While many brave Germans opposed Hitler, Josef Müller, a devout Catholic attorney with connections in the Abwehr – the German military intelligence organization – is the central character in this chronicle of events.  Frequently traveling to Rome, he secretly maintained ties between the German resistance movement and the Vatican, which was able to facilitate connections with the British and the Americans.  The author details how the pope was actively involved in these covert operations, while maintaining a public stance of neutrality; for fear that a more confrontational approach would endanger the many Catholics in Germany.

The book goes on to describe how the pope – justifying his actions based on the church’s longstanding support for tyrannicide – quietly provided covert support for Müller’s repeated efforts to facilitate the assassination of the increasingly paranoid Hitler.  As everyone knows, these efforts failed without exception.  So, unfortunately, the book turns out to be not much more than a story about a timid pope and small number of heroic but unlucky Germans who accomplished very little. 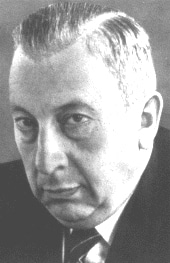 Regrettably, the book spends too much time on the machinations in the Vatican, while the true heroes were in Germany.  Despite their inability to do anything more than get some dust on the Fuhrer’s uniform, the men and women who resolutely risked their lives to take down Hitler and restore peace in Europe provide most of the dramatic heft.  While, Riebling makes it clear that the pope wasn’t Hitler’s ally or dupe, I didn’t find his role in the plots to be particularly inspiring.  It was the lowly men and women within the insanely dangerous German resistance movement who put their lives on the line day after day.

In more agile literary hands, this intriguing World War II story might have been more riveting.  Not surprisingly, it’s hard to write a story about repeated failure, no matter how valiant the intent of the protagonists.  While Church of Spies goes a long way in clearing up Pope Pius XII’s tarnished wartime image, I found the focus on his relatively risk-free role in the events caused the narrative to drag.  Despite occasional brief moments of dramatic tension, it’s a disappointing read overall.  Not recommended.