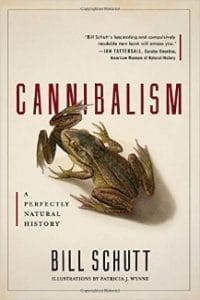 Don’t eat people.  It’s a pretty basic rule.  But just how critical is this mandate?  As civilization has changed over the millennia, many of society’s taboos have gradually drifted away, becoming almost quaint from a modern perspective.  What’s different about cannibalism?  In a thoroughly entertaining investigation, biology professor Bill Schutt reveals why the deed is a lot more common than you might think.  It’s simply entitled Cannibalism, but the topic is anything but simple.  In the interest of good taste, I’ll provide a reassuring notice to the easily distraught.  He’s neither pro nor con, just cannibal curious.

A female redback spider from Australia.

Animals from all walks of life have been found to be cannibals: tadpoles, snails, herring gulls, cichlid fish and all sorts of insects and spiders.  Even woodpeckers have been known to feast on a hatchling or two.  And don’t let your mammalian biases sway you as cannibalism has been documented in as many as seventy-five different furry species, from hamsters to chimpanzees to polar bears.

Like most life and death issues, cannibalism has served as a fruitful ground for all sorts of selective pressures.  It’s a veritable evolutionary engine.  For instance, if you can out compete your nest or pond mates and gain a nutritional boost in the process, you’re at a significant selective advantage.  With enthusiasm and wit, Schutt provides dozens of detailed and delectable cannibal stories.  His account of a shark species that pursues and consumes its smaller siblings while still in utero, is undoubtedly the most disturbing.

Although at first glance it seems counter-intuitive, Schutt clearly explains that the Darwinian logic is ironclad, even when one looks at sexual cannibalism.  He describes why it might make sense for a male praying mantis or an Australian redback spider to sacrifice its life – feeding its female companion in the process – in order to successfully mate and pass on its genes.

Schutt then proceeds to reveal the long legacy of cannibalism in human history.  He investigates claims from the West Indies, where Columbus accused the native Caribs of unrestrained ritual cannibalism, as well as China, where cannibalism was used as a way to display “filial piety” after the death of a loved one.  He then goes on to explore the traditions of the Catholic Church (currently 1.2 billion strong and growing world-wide) which involve the regular consumption of the “body of Christ”.  Finally and most intriguingly, he retraces the final steps – and last meals – of the 32 members of the Donner Party and their notoriously ill-fated effort to reach California by wagon train in 1846.  Understandably, cannibal history can be a rather contentious topic, but Schutt wisely approaches the subject with a skeptical eye, not allowing the inflammatory nature of some of the original reporting to cloud his view.  All in all, it’s a thoroughly engaging banquet.

While it undoubtedly takes a strong stomach to investigate and write about the often gruesome history of human cannibalism, Schutt fearlessly takes it to the next level when he participates in an act of cannibalism himself.  His initially reluctant foray into the practice of placentophagy is sure to give even the most adventuresome eater pause,

Lastly, Schutt uncovers what happens when cannibalism goes completely wrong.  Detailing the discovery of kuru in the native highlanders of New Guinea, he reveals how eating brains can come back to haunt you even decades after the act.  A little closer to home, he also reports on the late 20th century epidemic of bovine spongiform encephalopathy in the United Kingdom, which was a result of feeding cattle “meat and bone meal”, a product made from the remains of their expired colleagues.

Lighthearted, curious and adventurous, Cannibalism is an intriguing look at one of our strongest taboos.   In the end, it might leave you wondering, what’s the big deal?  For whatever reason, we seem pretty caught up in what happens to our bodies after we die.  Depending on our cultural preferences, we might choose to respectfully bury or burn our loved ones once they’ve passed on.  Maybe we scatter their cremains in a special place or feed their body to vultures.  Why is it so wrong to lovingly have a bite or two as a way to keep someone close to you?  While I don’t expect Schutt’s book to cause a major shift in culinary practices, it’s sure to make you think more broadly about humanity’s most deeply held beliefs.  Highly recommended.