Out of thin air… 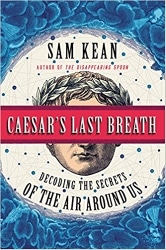 Sam Kean has done the math.  While a standard calculator won’t help you, it’s really just a (very big) numbers game.  When Julius Caesar expelled his last breath – more than 2000 years ago – it contained so many air molecules that it’s almost a sure thing that each and every breath you take includes one of those molecules.  And if this breath doesn’t, the next one probably has two.  Interesting, you may say, but so what?  Well in the hands of one of the greatest living science writers, this isolated piece of trivia serves as a doorway into the world of gases.  With Kean’s characteristic flare, Caesar’s Last Breath compellingly shows how there’s really no way to understand the scientific world without a thorough understanding of the air that surrounds us. 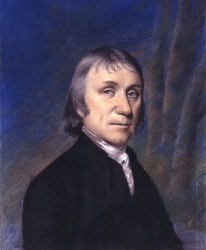 Despite the fact that he’s exploring a topic that is typically odorless, colorless and almost imperceptible to human sensation, Kean touches on a remarkably wide array of topics.  From volcanoes, meteorology and evolution, to medicine, warfare and space travel, he manages to weave together countless threads of scientific history into a remarkable narrative, taking the opportunity to reveal all sorts of fascinating science along the way. 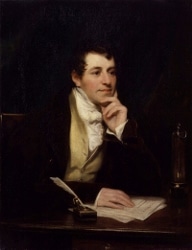 From James Watt and his steam engine to Alfred Nobel and his dynamite, the book introduces dozens of scientific luminaries, spanning the centuries.  Kean clearly explains the significance of their work and shows how it contributed to our current understanding of the chemistry of our planet and its atmosphere.  He even takes a brief moment to explore the unique life of Le Pétomane, the famous Frenchman who could perform “La Marseillaise” with his flatulence.

If you were to force me to review this book using just two words (and two punctuation marks) they would be:  Great storytelling!!  More deftly than any science writer I’ve ever come across, he makes science entertaining.  Without missing a beat, he transforms what could be a lethally long list of boring dead-white-guy scientists into a parade of intriguing personalities, characters in a riveting scientific saga.  If you were to allow me a few more words, they would be:  fast, fun and clever.  Kean’s ability to turn standard science facts that every science geek learned in high school into engaging can’t-put-down reading is nothing short of astonishing.  His breathtaking conclusion (pun intended) even managed to bring me to tears; it really is that good.

If you’ve enjoyed any of Kean’s previous three books, I strongly encourage you to read more of them.  But having read them all, I can confidently state that Caesar’s Last Breath is the best one yet.  This is no small achievement given the quality of its predecessors.  Full of fun science and intriguing characters, it gets my highest recommendation.

Check out these reviews of other Kean works:  The Tale of the Dueling Neurosurgeons   /   The Violinist’s Thumb