From A to Bee… 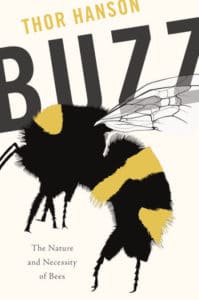 Unless you’re really paying attention, you might not realize how many there are.  You can probably see bees anytime you visit flowers in the garden, but did you know that there are over 20,000 different species worldwide?  While honey bees get most of the attention, there are many more.  Leafcutter bees, bumble bees, mason bees, sweat bees, alkali bees, mining bees, plasterer bees, masked bees and carpenter bees to name a bunch.  And while every species is unique, all bees pretty much do the same thing: collect pollen and nectar, pollinating countless different flowering plants in the process.  They’re some of the most amazing creatures on the planet, and conservation biologist Thor Hanson is thrilled to tell you all about them, in Buzz.

Basing his adventures out of a cozy writing hut on San Juan Island in northwestern Washington and often assisted by his young son Noah, Hanson makes it clear from the beginning that he’s going to focus most of his efforts on the lesser known species.  They can be critically important, but often go unrecognized.  While honey bees are abundantly fascinating, they’ve already received plenty of press. 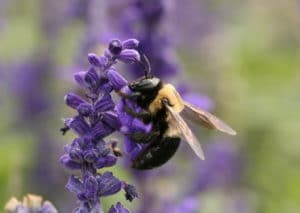 Appropriately, the author starts out at the beginning, 125 million years ago, when the earliest bees transitioned from the life of a svelte predatory wasp to the life of a fuzzy vegan bee – all pollen and nectar all the time.  While this transformation clearly happened, the details are still mysterious and Hanson delves into the topic with gusto, consulting with experts and pursuing clues on his own by peering eagerly into small chunks of Baltic amber. 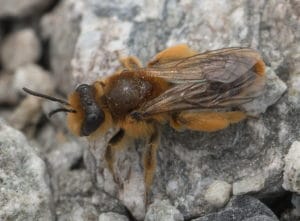 Much like he did in Feathers and The Triumph of Seeds, Hanson displays a remarkable knack for explaining lots of complex biology and ecology in an approachable and enthusiastic manner.  While there are a lot of great science writers out there, he ranks right up there among the best.

Exploring the incredibly important relationships that bees have with the flowering plants, Hanson goes on to discuss how humans and other animals have often taken advantage of bees’ many skills.  He even argues that many of the mysteries of human evolution begin to make sense when one factors in humankind’s insatiable fondness for honey.

Bees have played an important role in agriculture for millennia, but with modern industrialization of the food supply this role has grown increasingly more complicated and fraught with hazards.  Everyone knows that we rely on bees for much of our food supply, but until I read about Hanson’s dissection of a McDonald’s Big Mac I didn’t really understood their importance so viscerally.

Finally, the author worries about extinction.  Many important pollinators, particularly some varieties of bumble bees are on the verge of extinction, due to habitat loss, chemicals and who knows what.  As the bees disappear, entire ecosystems may start to unravel.  At the end of the book, Hanson spends time with some of the people who strive to protect these little known creatures, managing to find some hope along the way.

A fitting tribute to some of the most fascinating – and overlooked – little creatures on the planet, Buzz is another great addition to Thor Hanson’s growing oeuvre of entertaining science works.    Highly recommended for anyone who enjoys exploring the countless overlapping layers of our natural world.

Check out my reviews of Hanson’s other books:  The Triumph of Seeds   /   Feathers

More reviews of books about bees:  A Sting in the Tale   /   Honeybee Democracy   /   The Fly Trap