But What If We’re Wrong? 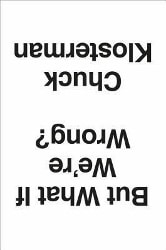 Chuck Klosterman’s brain is one-of-a-kind.  It’s some sort of (presumably) biologically-based logic-driven mental-machination contraption.  You simply enter an idea – the more implausible and convoluted the better – and watch the gears, gyroscopes and nuclear-powered turbines start turning.  For the Klosterman-naïve, this can be quite an unsettling experience.  But if you’re ever read any of his prior work, like I Wear the Black Hat or Eating the Dinosaur – and you’ve got least one copy of the nerd gene on chromosome 13 – you know that his unique brand of mental gymnastics can be thoroughly entertaining.  He’s done it again with his most recent adventure, But What If We’re Wrong?.

Now he’s not talking about being wrong in any sort of trivial way – like mistakenly thinking that Pluto is (or isn’t) a full-fledged planet.  He’s talking much bigger than that, questioning the very nature of reality.  More specifically, who’s to say that the current consensus view of our existence – inhabitants of a small planet revolving around an ordinary star in the outskirts of an ordinary galaxy among billions of others in a universe that is almost 14 billion years old – isn’t completely wrong?  Maybe our view of reality is as mistaken as it was before Copernicus proposed that the Earth wasn’t at the center of the universe. 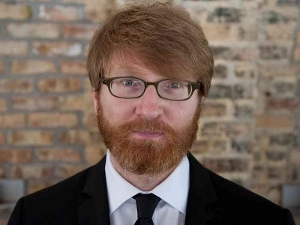 He proceeds to try and figure out how likely it is that we’re currently just as wrong as our pre-Copernican ancestors were all the way back to Aristotle.  Along the way he butts heads with luminaries like Neil deGrasse Tyson and plenty of other experts – traditionalists and fringe-occupiers both.  Are future reality-altering scientific revolutions on the horizon?  Or are we so biased by our current thinking that we can’t even imagine the future in any sort of meaningful way? 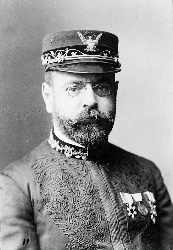 Not surprisingly, Klosterman explores all sorts of side matters, focusing on the future of some of his pet topics:  television, rock music and professional football.  If you’re interested in pondering who will be the face of late 20th century popular music three hundred years from now  or which television show archaeologists in the 26th century will find most representative of life five hundred years earlier, Klosterman gives you all sorts of ideas to chew on.

But when he’s not debating the pros and cons of Elvis versus Dylan, he frequently returns to the nature of reality itself.  Is the past real or is the result of a highly effective conspiracy?  Are we all actually characters in a highly sophisticated video game?  Do the answers to these kinds of questions really matter and is it healthy or socially beneficial to even ask them?

I’m afraid that my preceding comments might make Klosterman seem like more of a wacko than he really is.  While his launching points are often bizarre, his analysis is entirely reality-based, consistently thoughtful and almost compulsively thorough.  I appreciate that his only agenda is vigorous discussion and that he isn’t afraid to follow any lead down whatever rabbit holes appear.  He’s content with letting his arguments speak for themselves and he doesn’t try to tie them up in pretty wrapping paper or create just-so stories.

My only criticism is that he should have interviewed a neuroscientist like Sam Harris or David Eagleman who are at the forefront of understanding how our nervous system creates illusion for us every day.  The more we understand about how our brains function, the more tenuous our definitions of reality and free-will become.  Potentially another revolution in the making.

Sure to please Klosterman fans everywhere, But What If We’re Wrong? is one more quality addition to the man’s unique oeuvre.  It’s overflowing with creative speculation and is as mind-bending as it is entertaining.

Other reviews of books full of philosophical ruminations:  Why Does the World Exist?   /   Does Santa Exist?