Brief Candle in the Dark 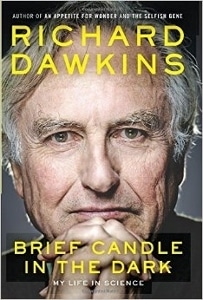 It’s one of the most profound and all-encompassing ideas in the history of science. Just over 150 years after its publication, Darwin’s theory of evolution by means of natural selection continues to generate discussion, disagreement and controversy.  While many great scientists have devoted their lives to expanding on Darwin’s work, there may be no one alive today who has done more to enlighten the world about natural selection and its myriad ramifications than Richard Dawkins.  After recently beginning his eighth decade on the planet, he published the second volume of his memoirs, entitled Brief Candle in the Dark.  I’ve been a huge fan of his work for a long time and I’m happy to report that it appears he doesn’t plan on slowing down any time soon.

Picking up where he left off in An Appetite for Wonder, Dawkins – currently an emeritus fellow at New College, Oxford – focuses on the years following the publication of his wildly popular The Selfish Gene in 1976 at the age of 35.  He sequentially touches on each of his subsequent books, providing much of the backstory behind each volume, including my personal favorite – his magnum opus – The Ancestor’s Tale.  Never one to miss an opportunity to expound evolutionarily, Dawkins spends a considerable portion of this book reviewing and expanding on many of the themes in his previous dozen books. 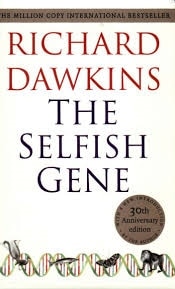 Cover of the 30th anniversary edition of The Selfish Gene.

He also describes his gradual ascension to forefront of the New Atheism movement, most notably with his publication of The God Delusion, a bestseller in 2006.  Unintentionally – and undeservedly in my opinion – having given new life to the word strident, Dawkins explores how this book exposed him to a whole new world of criticism and ridicule.  Entertainingly, he uses this book to respond to much of the disapproval with humor and literary flare.

One of my complaints with volume one was the paucity of information about Dawkins’ personal life. I’m happy to report that he opens up a bit more this time, revealing much about how he met his third wife, actress Lalla Ward, and spending a considerable portion of the book describing her artistic endeavors and how they have gone on to collaborate on numerous projects.  He also includes information about his only child, physician Juliet Dawkins.

As always, Dawkins’ writing is consistently engaging, whether he’s writing about his friendship with the late great comic writer Douglas Adams, criticizing evolutionist Stephen Jay Gould or eating lunch with the celebrated paleoanthropologist Richard Leakey, a fellow Nairobi native. An equally entertaining companion to its predecessor, Brief Candle in the Dark is a compelling look at the life of one of the most influential scientists of our time.  While his career may have passed its zenith, it’s clear that he still has plenty to say and will continue to enthusiastically stand up for reason at every opportunity.

Check out Dave’s review of An Appetite for Wonder.