There’s no excuse for murder…? 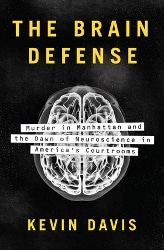 It’s so basic that most of us learned it as children.  You’re responsible for your actions.  If you do something wrong, you should be punished accordingly.  Our entire legal system is founded on this concept.  But what if it’s not that simple?  What if something is unequivocally wrong with your brain?  Does that give you a free pass?  Can a tumor or some other neurologic defect excuse a violent act like murder?  It’s a profoundly disturbing idea, but recent advances in criminology and neurology suggest that it may be an idea whose time has come.  In The Brain Defense, journalist Kevin Davis explores this new and disconcerting development in the world of crime and punishment.   It’s a world where brain scans are becoming as commonplace as fingerprints and eye-witness testimony.

Davis builds his story around a man named Herbert Weinstein.  Until January 7th, 1991, when he killed his wife and threw her body from his 12th story apartment window to the Manhattan street below, Mr. Weinstein was just a mild-mannered, 65 year-old semi-retired advertising consultant.  Investigators – and everyone he had ever met – were thoroughly puzzled, as Weinstein was clearly a loving husband who had no history of violent or criminal behavior.  But when a subsequent MRI scan revealed that he had an orange-sized cyst on the left side of his brain, impinging on his prefrontal cortex, the plot thickened substantially. 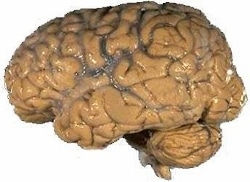 It’s not really much to look at…

Most of us rely on our pre-frontal cortex an awful lot.  It appears to play an essential role in rational decision making, social interaction and impulse control.  Repeatedly in the annals of neurologic history, individuals who have sustained injuries to this part of the brain have been found to exhibit personality and behavioral changes that can be quite subtle and sometimes rather eerie.  It’s entirely plausible that Weinstein’s cyst was causing enough brain dysfunction to explain his sudden loss of impulse control and subsequent murderous outburst.  It might be as simple as no cyst, no murder.  But if he’s not truly responsible for his actions, what about all the other violent criminals?  Many of them have brains that don’t look quite right on a functional MRI or PET scan.  Should they be judged not guilty as well?

With an entertaining and inquisitive journalistic flare, Davis explores all the disturbing ramifications of this line of thought.  With increasingly sensitive brain imaging technologies, neuroscientists have cast a shadow on the entire concept of free will and personal responsibility.  Not surprisingly, the judicial system is struggling to make sense of it all.  The idea isn’t new – juveniles and mentally ill individuals have long been viewed as deserving of special protection in the courts – but it’s hard to see where it will end.  The author deftly weighs the two competing goods – mercy and justice – attempting to find an acceptable and rationale balance.

While Weinstein’s deformed brain makes for a particularly graphic example, there are many similar cases out there that aren’t nearly as clear cut.  From addled former NFL players to IED-shocked Iraq War veterans, there are a lot of brain damaged individuals out there.  Unfortunately, some of them have committed violent crimes and juries have strived to determine their level of responsibility.  Davis touches on some of these stories and points out the troubling fact that brain experts are all over the map on these issues, making things all the more complicated for those tasked with the generating a just verdict.

Who’s in charge, me or my brain?   If all the buzzing electrical activity inside my brain is ultimately responsible for my actions, what responsibility do I as a person have?  As we learn more about brains – and their owners’ limited ability to control them – the answers to these kinds of questions are becoming increasingly difficult to answer.  The Brain Defense is a thoughtful and provocative look at these looming issues.  Highly recommended.

Other reviews of books about brains and the people who love them:  Waking Up   /   The Brain   /   Incognito   /   The Tale of the Dueling Neurosurgeons