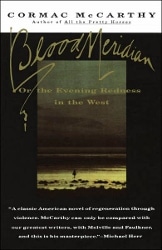 Darkest of the dark. Famous for his violent and depressing works, most notably No Country for Old Men (2005) and The Road (2006), which were both successfully adapted to the screen, Cormac McCarthy is frequently found on the short list of the greatest living American novelists.  Although it didn’t gather much attention when it was published in 1985, Blood Meridian is often referred to as his greatest novel.  Savage, horrific and disturbing in ways I didn’t think possible, it’s sure to generate strong feelings from anyone brave enough to tackle it.

Based on the historically infamous Glanton Gang, Apache bounty hunters who terrorized the borderlands between Mexico and the United States around 1850, the book follows the exploits of “the kid”, a teenager from Tennessee, who joins up with the gang in their scalping raids. Although the group toils mightily against the harsh environment, always struggling to find water and food – and whiskey – they never let any obstacles limit their drive to destroy anyone who has the misfortune to cross their path.  While the kid is an intriguing character with a particularly impressive survival sense, the main attraction is Judge Holden, a giant, enigmatic hairless white man who often leads the group with a powerful combination of irresistible charisma, evil genius, philosophical sophistication and cutthroat violence.

And when I say violence, I mean some of the most shocking stuff imaginable, spilling over every page. Not gratuitous.  Not glorified.  Just unrelenting.  And the vicious acts are so dreadfully ubiquitous that they eventually become sickeningly mundane and creepily normal in a world that has gone completely mad.

When they can’t kill Apaches, they find other Indians to kill. Or Mexicans.  Or horses.  Or barkeeps.  Or women and children.  Or each other.  It goes on and on until it becomes clear that war is the eternal norm in this 19th century post-apocalyptic hell.  And if you think I’m exaggerating, you’re wrong.

But what’s most remarkable about the book, as I alluded to earlier, is the things McCarthy does with the written word. They simply defy belief.  Incessantly wielding innumerable similes with reckless abandon, his prose is so wrenching and vivid it’s hard to believe that McCarthy wasn’t there, in the line of fire on the lawless frontier with the most deranged gaggle of hooligans ever conceived.  Convoluted and contorted – not always comprehensible – the writing is amazing in its power.  Much more than just raw machismo, the author’s exertions make the wild story that much more believable; harder to dismiss as just the imaginings of a disturbed novelist.

Frequently featured high on lists of the greatest novels of the 20th century, Blood Meridian may be the craziest western novel every written. While it’s hard to not be overwhelmed by the merciless brutality and depressing tone, the story becomes increasingly affecting as it crescendos to its final showdown.  It’s difficult to recommend a book that’s so horrifically violent – and I think I’ve made it clear that it’s not for everyone – but it really is a remarkable read.   Even though the story lacks even one iota of humanity or redemption, the peculiarly powerful writing ultimately becomes irresistible.