Black Hole Blues and Other Songs from Outer Space

If you build it… 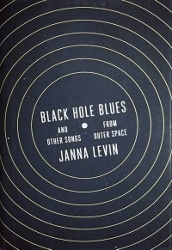 The usual superlatives fail.  Even extra tremendous superlatives don’t do the topic justice.  Theoretically, gravitational waves are everywhere, generated by actions as simple as the Earth’s revolution around the Sun.  They’re just so vanishingly weak that Einstein – the man who first convinced the world that they exist – thought they would forever be undetectable.  But few things motivate an experimental physicist more than the claim that something is impossible.  What if one searches for the most energetic gravitational events since the big bang?  Could such an event produce enough gravitational radiation that it just might be barely detectable?  In Black Hole Blues and Other Songs from Outer Space, theoretical cosmologist and novelist Janna Levin tells how scientists have been trying to answer this question, attempting to detect the undetectable.

Over the past century, the search for theoretically tantalizing entities, like the Higgs boson or the various flavors of quarks, has resulted in the building of incredibly complicated – and costly – laboratories around the world.  Although not nearly as expensive as the Large Hadron Collider in Europe, the Laser Interferometer Gravitational-Wave Observatory (LIGO) is a similar type of “Big Science” project that began its initial operations in 2002 in a cooperative effort by physicists at Cal Tech and MIT.  Consisting of two identical observatories in Hanford, Washington and Livingston, Louisiana, LIGO’s four kilometer vacuum tubes were configured to detect the slight perturbations in space-time that are expected when a gravitational wave passes through the Earth’s neighborhood.

An artists conception of a massive black hole. Don’t get too close!!

Hoping to detect gravitational waves in time for the 100th anniversary of Einstein’s theory of general relativity, the project relied on the collective genius of a trio of men:  Kip Thorne at Caltech, Rainer Weiss at MIT and Ron Drever at Caltech via Scotland.   This determined and remarkably creative group overcame more than just the physical challenges of sensing the faintest blip ever detected, they also faced the countless bureaucratic obstacles that stood in their way.

Unfortunately, despite the catchy title, Levin spends most of the book writing about the numerous personality conflicts and administrative details that almost killed the project.  When she’s writing about black holes and neutron stars, her prose is both poetic and profound.   But when she’s writing about university politics, congressional hearings and National Science Foundation budgets, the story really grinds to a halt.  There’s enough interesting science here for an excellent National Geographic article, but not for a whole book.

I suppose Big Science projects are always going to be 80% bureaucracy and 20% inspired scientific genius, but the resulting ratio doesn’t make for very interesting reading.  Regrettably, Black Hole Blues and Other Songs from Outer Space falls victim to this reality, leaving me to wish I was reading something else.  Not bad, but not recommended.